Entitled Custys From Hell: Special Kids, And The Asshole 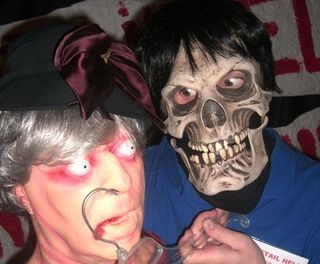 This was years ago, and it was the worst case of emotional whiplash I've ever experienced.

Set up: Hotel, near city conference centre. Concert that evening, I forget who it was now, but it was someone popular (dealt with a LOT of concerts... they all blend together)

It had been arranged that several critically ill (to paraphrase Molock... "You know the kind of illness you get better from? Yeah, not that kind of illness...") are getting to meet the performer, go backstage, the whole thing.

We got involved (I was the Exec Chef at the time), and decided to go all out for these kids. They're going to come to the Hotel before the show, and we're going to treat them like rockstars.

We set up a banquet room for them, full rock star rider... M&Ms separated by colour. Full hot buffet of awesome kid food. We had a "Champagne fountain" of ginger ale, served by servers in white gloves, giving VIP service. We rolled out a red carpet at the front door, and every manager in the building stayed late. We stood in rows beside the red carpet at the front door, greeting these kids as they came in... in wheelchairs, or on crutches.

One kid brought tears to my eyes when he stopped his mom and struggled to his feet from his chair and said, "I'm only gonna get to do this once, and I'm gonna WALK this red carpet."

And you know what? He did it. It clearly exhausted him, and he damn near collapsed back into his chair afterward, but that little badass walked the walk with his head held high. And damn me if he didn't get applause the whole way. Whatever his body was going through, his spirit was soaring like an eagle, if the smile on his face was anything to go by.

And here's the crack of the whiplash, where I went from dewey eyed and smiling to pissed off with no in between.

Note: we did not 'block' the entrance... other guests could still walk in the other door... but it was obvious that we had one of the two doors roped off, with a red carpet. We did not limit access to other guests, nor ignore them. We were still fully staffed, and all staff on hand for this particular event were working for free. 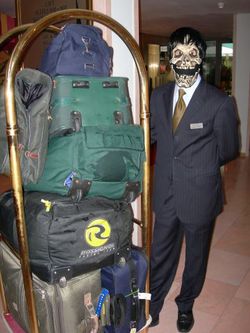 So, as these kids are arriving... this red-faced, fat-assed, balding, shuffling asshole shows up. Pushes into the hotel, and waddles up to the front desk.

"Whats all this about?" he asked the front desk clerk, as he waved his pudgy paw at the kids.

"It's a VIP event for some very special children" replied the clerk.

I overheard this, and it took every ounce of self control I had not to punch him the jaw. Not a hint of humour on his face, not a hint of sarcasm, or even the slightest hint that he might not be serious... because he was dead serious.

This wasn't an imposition on him. Didn't slow him down. Didn't take his room from him. Wasn't taking up the corner stool at the bar. Wasn't going to eat the last burger patty. He just wasn't being treated as well as these kids... who were all terminally ill.

I was seething with rage. Writing it now makes me seethe with rage. And on my dying day, I will remember that little fucker.

"And on my dying day, I will remember that little fucker."
This makes it sound like you expect to lead a very pathetic life, if THIS is something you will remember something like this before dying.

For once I have to agree. Infuriating in the moment, sure, and was that jackass over the top? Yes he was. But it's...really not worth letting this occupy so much space in your brain that it's constantly chewing at you. Karma will get the bastard in the end; just let it go.

You were Executive Chef? Correct response: "We are refusing you service. Get out, now. Or I call security and you are arrested and have to explain this to a judge.Tomorrow. After a night in jail."