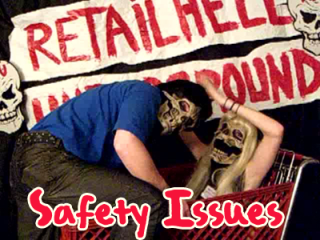 Back when I was 16, I worked at a pizza place. It's the middle of July in the Midwest, so guess what kind of weather we got? If you said 'freak storms" you are correct.

It's mid-morning and the initial rush has petered out. We just have one customer and he's waiting for a pizza he ordered.

It starts to rain, and quickly moves to rain and hail. The winds start going crazy outside, the rain is pouring down along with some quarter size hail. We're basically looking at weather that goes to funnel clouds very easily. It happens very quickly: it was starting to rain when our custy walked in the door, we build his pizza from scratch and it's in the oven. It's been less than fifteen minutes.

One of my delivery drivers is in the back and he calls to me, with the phone pressed to his face, to say our other pizza driver is huddling under an overpass with some poor random bicyclist huddled in his back seat for shelter. (He'd been caught in the weather and the driver stuffed him in the back seat for protection against the flying debris.) He tells us it looked like a funnel cloud was forming and it had blown past them and was heading in our direction. I go back to thank the driver for the info, and to tell the driver to stay safe and come back when he can and not to rush.

As this is being relayed back and forth, there's a massive crash and the sound of breaking glass. Our GM comes running out of her office yelling and cursing, thinking someone in the store just destroyed something.

I come running out of the back because the whole damn building shook and oh my fucking God there was a customer out there! 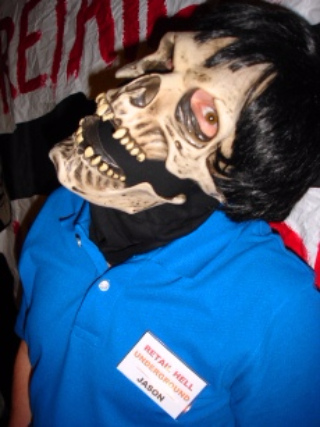 What do we see? Our marquee has been ripped off the building and chucked through our front window like a battering ram. It snapped in half so that half of it was in the lobby, the other half had cleared the counter and come into the area where we cooked and prepared food. If I hadn't gone back to talk to my delivery driver, there was a real chance I would have been hit by the thing.

The poor customer in the lobby had hit the floor and covered his head with his hands. He came up slowly, shedding pieces of glass, and turned around to stare at this huge metal thing that missed him by about a foot. (The customer was okay; none of the glass had actually cut him.)

Our GM yells at him (over howling wind, rain and bouncing golf ball sized hail that's now playing pinball in our lobby) to get behind the counter with the rest of us, and rushes us all to the walk-in cooler. We wait in the cooler for about 30 minutes for the noise to drop before coming out.

Our power was dead, but we made our customer a new pizza with fresh ingredients (the one in the oven, plus the ingredients we'd had out in the prepping station, were scrapped on the off chance that they had gotten glass in it) free of charge and gave him directions for cooking it at home.

By this time, the storm is gone and it's just another beautiful summer day; bright blue skies with a lovely rainbow. If it wasn't for the giant sign in our front window, you wouldn't be able to tell there was a storm! (The funnel cloud never actually touched down, apparently, but we'd been sideswiped by the winds.)

Our GM runs off to call corporate to let them know the store is closed due to our sign sitting in the front lobby. And corporate? Wanted to know why we couldn't just sweep up the lobby and continue business. Our GM told them that we had no power and it was a safety issue to allow customers to climb through a shattered storefront for food that we couldn't cook anyway. Only the threat of possible customer injury made corporate (begrudgingly) agree that closing the store was the best option.

Holy fuck, I'm glad you and the customer were all okay!