Awkward Asian Wearable Wednesday: What's The Difference Between "Many" And "Really Many?"
A Fortune Cookie Snoop Dogg Would Appreciate

A video has emerged of an angry woman trashing a gas station in front of shocked shoppers and staff.

The footage, which appeared on YouTube on Tuesday, began by showing the unidentified woman sitting on one of the counters inside the store.

Clutching a paper soda cup in one hand, she told one employee how she would 'beat' his 'a***' after being freed from jail where she was due to serve time for disorderly conduct. 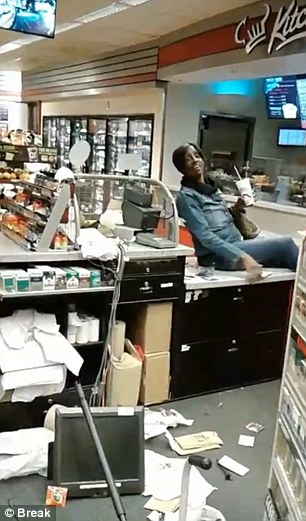 The woman calmly began her trail of destruction by throwing a bag of chips at the his head, later shouting: 'When I get out, I'm going to f*** your a** up.'

It's not clear where or when the video was taken. The woman shouted 'ATL' repeatedly at one point, suggesting she may from Atlanta, Georgia.

She then tossed packets of candy on the floor before knocking over the computer at the register as onlookers gasped and staff pleaded: 'You need to calm down.'

'I did it, I did it. Call 'em,' she said, egging on workers who had threatened to phone the police.

She then hopped down from the counter and appeared to walk away, shouting: 'See ya, wouldn't want to be ya.'

Before leaving the gas station, she walked the aisles running her hands along shelves of goods so they fell to the ground.

As she became more aggressive in her rampage, other customers urged her to stop.

The woman eventually was shown out by a male shopper who appeared to escort her to the door from the back of the store.

Police Atlanta told DailyMail.com they hadn't yet been aware of the video but were looking in to it.

Well. That was certainly very adult of her. Obviously not someone used to making good choices.