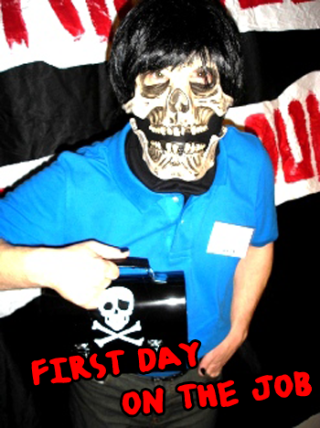 I was 15 at the time, and working at grocery store, and it was my first day at work.

I was being given a tour, and told about the local customers, including a man who was said to be very rude, especially if you did something wrong.

So, while I was being showed how to work the counter, this man - as I was about to learn - walked up to me. Of course I had a co-worker by my side, but she had walked to the back of the store to get some cigarettes for another customer real quick.

As I immediately learned, this guy was a giant douche. He wanted to buy a pack of smokes, and some tobacco. I fumbled with finding the correct smokes and tobacco, as I had not yet learned where they were placed.

He got mad at me at that, and told me, directly, that it was really bad service that the store had someone who didn't even know what they were doing serving the counter.

Luckily, I'm an open-minded guy, and I knew that I shouldn't really care what he was saying, so I just told him: "I'm sorry about that sir, but I am completely new at this job, so I have to learn it somehow."

Him: "Well, why aren't you practicing on some of your co-workers then? There's no reason in you serving real customers if they will get a bad experience out of it."

Me- (trying to keep my cool, was really close to telling him to just pay and shut the fuck up) "Well, both me and my boss thought it a good idea for me to practice on customers right away. That'll be [insert random amount here].

He then hands me a real high amount of money, lets call it 60 bucks (Somewhat fits the amount in Danish Crowns).

Looking in the counter, i can see that we are almost out of change, and I ask him if he can pay by credit card. He agrees, but tells me he has to draw 30 bucks, and then I tell him I would rather have the 60 bucks, since it would be easier for me to give him change off of that.

He then gave it to me, and when my brain totally froze, and I couldn't calculate how much I needed to give him back, he yelled and screamed at me, making me more stressed. By now, my co-worker was back, and she immediately, without even asking what was happening, told him to get the hell out of our store, and asked me if I was okay.

I just laughed at him, telling her that I didn't mind, and that it was a great introduction.

"I'm sorry about that sir, but I am completely new at this job, so I have to learn it somehow."

Him: "Well, why aren't you practicing on some of your co-workers then? There's no reason in you serving real customers if they will get a bad experience out of it."

Ok, then, we'll wait for my co-worker to return. (puts everything back.)

"Well, why aren't you practicing on some of your co-workers then?"
Yeah, UNFORTUNATELY, I seem to have a CUSTOMER in front of me this very second. I can't ignore a customer in favor of practicing with coworkers now, can I?

"I don't like your attitude at all"
*shrug* That's fine.

Wait, you're not the supervisor? My co-workers told me he was going to role-play an extremely unpleasant customer. Huh.