Stressagains: The Restaurant for Stress-Eating
Customer Reject of the Day: Dr Pepper vs Cranberry Apple

YoAuntie's Valentine's Creepiness At The Market 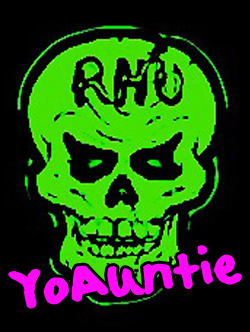 Our regular market days are Thursday through Saturday. But since Valentine’s Day was on a Tuesday this year, I teamed up with the florist and candy store to open a “grab and go” gift shop in the vestibule on the big day.

I was busy tucking pink tissue into red gift bags when the absolute caricature of a pervert slipped nervously into the market. He was 50-ish with a comb-over and watery eyes that wouldn’t meet our gaze, and he was wearing a trenchcoat on a day when most people were in shirtsleeves. Literally wearing a trenchcoat!

He chose the largest floral arrangement on the shelves (it wouldn’t have looked out of place at a Mafia funeral or around the neck of a Kentucky Derby winner), and threw cash and a handwritten note at the cashier.

Moments later, I overheard Anita the florist complaining that she couldn’t read the note. “These aren’t even words!”

I came over and looked at the note, and eventually discerned that it was written in bad Spanish by someone with atrocious handwriting. So I grabbed the note, a gift card, and a calligraphy pen, and went back to my table to work on it.

The card started out with heavy-duty baby talk, the Spanish equivalent of googoo-gaga. Sickening really. But everyone has their kink. Rolling my eyes, I faithfully transcribed it. Halfway through, I had to take another card, because this was an 80-word demonstration of how to talk to infants.

Then my jaw dropped. The message suddenly turned profane without any warning, with a jarring combination of graphic sex and infantile language. It creeped me out. I finished the task, wrote a quick English translation on the original note, and gave it to Anita.

Because she didn’t speak Spanish, it was hard to explain the way in which this went beyond romantic baby talk and into something really disgusting, but she believed me. Her standard policy was to deliver all pornographic gift cards (which is apparently a very common thing in her profession) with a warning on the
front. So I wrote on the envelope “abre en la intimidad,” and Anita instructed her delivery driver that if the recipient gave any indication that she was underage, he should retrieve the note and bring it back so that we could call 911.

We waited impatiently for the driver to return and report.

He told us that the recipient was a middle-aged, very prim-looking woman, who said with a heavy accent, “Oh, how thoughtful of Derek to send these!”

Proving once again that “de gustibus non est disputandum” ...there’s no accounting for taste. And who knows what is happening in the "intimidad" of your neighbor's suburban home.

So, just because some baby-ish talk (which you admitted might just be a kink) turned openly sexual, you just immediately assumed that this guy must be having an illicit relationship with someone underage? If that is the kink between two (or more) people, none of your business.

meh, so this guy did not creep on anyone, did something "very common" in the industry, and at least had the grace to have it (badly) written down rather than make you listen to it, bought the most expensive thing in the store, and his lover was really appreciative of his gift?

Why not just send the handwritten note with the flowers, instead of rewriting it or translating it?