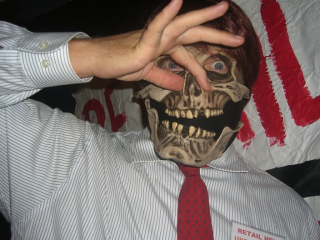 This happened a few years ago. I have not returned to the shop since.

I was at one of those frozen yogurt places that lets you fill a cup with yogurt and top it with various treats. My husband and I had purchased our cups and had taken a seat outside at one of their tables in order to escape the young teenagers hanging out inside. The table was on the side of the building which had large windows so we could still see inside the shop. I was sitting on the end of the table that faced into the shop.

While I was eating, I had taken notice of the man sitting alone at a table inside. He had a laptop which was odd for this kind of place. It had free Wi-Fi, but it wasn't like a coffee shop where people would sit and do work. People would eat their yogurt with their friends, socialize, and then leave after they were finished. I wasn't staring intently at him but since I was facing the window, it was difficult not to look. I kept glancing up and it soon became apparent that as he was intently watching whatever was on that laptop's screen, he was slowly putting his hand up his loose fitting cargo shorts.

Since there was a small wall blocking the employees' counter from the table the man was sitting at, my husband went inside to direct the employees' attention to what was happening. He was told that they knew who he was and what he was doing but could not ask him to leave.

Baffled, my husband and I watched as the clueless young teenagers walked past him wearing very summer appropriate clothing. The man stopped watching his laptop and without removing his hand from his shorts, addressed the young girls sitting at a table near him. This really upset my husband and I so we went in to keep an eye on things since the employees didn't seem bothered.

Luckily, he left a few minutes after we came in and sat. But why wasn't he asked to leave? The employees were familiar with him so does that mean he frequents the establishment and is totally allowed to do this often? What?

I'll bet if you'd posted a video of him on Facebook, and explained that corporate policy prohibited the staff from kicking him out, that corporate police would have been changed (assuming it even existed in the first place - a lot of people are just unwilling to deal with crap like that).

Hell, if you'd taken a video - especially of him talking to underage girls - and called 911, I expect it would have solved all kinds of problems.

Google is correct. Definitely time to call 911. That kind of behavior is very against the law

What exactly was he doing that was against the law? Don't get me wrong, it was clearly inappropriate and the business should've thrown him out.

But having your hand down your pants and talking to someone is not a crime. They would need to prove that he was legitimately getting himself off and that's impossible to do in the situation described.

If anything, it would've wasted the officer's time and possibly traumatized those girls.

Oh look, the social justice warrior is back again completely missing the delicately worded point on the post.

He was playing with himself in public, if you think that's ok, SoD, then you might need to not breed. Or look after other people's children.

Now, I'm not saying you can't stand near this guy and publically shame him, making everyone openly realized what is happening. Just that, as it is, nobody really has a leg to stand on. (...that's what she said?)

plus. google, if you took a video of a guy without his knowledge or permission and put it on the internet, yes, he would be shamed, but you would SO be legible for being sued by him. And probably winning.

Goddamnit Lighting, HE WAS JACKING OFF IN PUBLIC. It doesn't fucking matter that he kept it in his pants, it wouldn't fucking matter if he had a bigass carboard box around him, you don't fucking do that in public where absolutely no one has given the okay for you to do so.

You want to beat off in your house around friends and/or partners and they're okay with it? Sure, go ahead. But in public around strangers that have absolutely not given permission to you get off around them and aren't okay with this? Abso-fuckin-lutely not.

Oh loo, they're both at it now. Completely missing the point.

If you take a video of someone IN PUBLIC you don't have to ask permission for anything.

It's funny, Lightning, you are always making up these ludicrous, insane and completely unrealistic scenarios in here but when faced with a real one you can't see what's wrong.

This is completely not ok on any level.

I haven't started being harsh, I just can't stand apologists for people who inflict their kinks on others.

Rysky, I'm just pointing things out in a legal matter. Sure, you KNOW what he's doing. But the law is, unfortunately, very clear on what the requirement for certain actions are - public indecency requires nudity. Even if you jack off through your clothes, it's technically not enough to get the police involved.

Molly, I'm not saying it's okay what he did - I'm not apologizing it. If anything, I'd like to kick this guy's ass or, as mentioned above, stand near him and loudly exclaim, "DO YOU *ENJOY* STROKING YOUR DICK WHILE LOOKING AT UNDERAGE TEENAGERS?". One thing these 'discreet' types of public exposure guys don't want is ACTUAL public exposure. It's just that you can't deny that Storm does have a valid point.

I'm pretty damn sure no cop would think their time was wasted to discourage this pervert.

And while it may be legal to rub your penis or vagina in public through your clothes in Germany, it certainly isn't legal here, it's sexual harassment, lewd behaviour and having sex in a public place in the UK. The pervert would get arrested. Gods know what it is in the US.

Molly, things are similar in the US. IDK the exact charges they would file, but lewd and lascivious behavior is one of them, and most likely something to do with minors as well. He would most likely be required to register as a sex offender, even if he didn't get hard time for it, and no cop I ever spoke to would consider that a waste of time

Thank you, Tenebris, I was wondering for a moment if I had walked into the Twilight Zone where decency laws didn't apply just because you couldn't see the todger.