The Dumbest Question: From a Longtime Sprint Customer
Spaces Matter

This happened about 6 years ago, and is worthy of a jaw-drop. It's one of the many reasons I'm glad I now have clients, not customers.

So back in the days when I worked in a drug stores photo lab, I had several regular customers.

One day a regular walks in, we'll call him Mike, (name changed, you'll see why) with his wife, and while I haven't seen him in a few months, that's not unusual.

Mike is a nice guy, he's retired from being a corrections officer, and tries to keep busy with other projects. So seeing him sporadically isn't out of the ordinary.

Only when he comes in this time, he's got a really bruised face, with a few stitches. It looked like he was in a UFC fight or something.

So I ask what happened, and he and his wife both have worried looks on their faces, so he tells me what happened...

Turns out a couple weeks ago, he was involved in a road rage accident. Some guy pulled up behind him while he was driving, tailgating, honking, all that aggressive stuff.

So Mike pulls over to let him pass, and the guy pulls up right behind him. The other guy, we'll call UFC.

UFC is tall, he's got some muscles, and is probably in his 30's. Mike is in his late 50's, at least a foot shorter, and probably about the same weight.

UFC gets out of his car, comes to Mikes window, and starts banging and screaming obscenities.

Mike tries to calm the guy down, and can't from inside the car, so he gets out, and tries talking the guy down. UFC then start hitting Mike, pummeling him.

Mike does what he can to defend himself, but he's easily outmatched.

Turns out UFC also actually boxes for a living, and knows a martial arts or two.

His hands? Registered as lethal weapons!

So he gets on top of Mike, holding him down, beating him, and Mike, having no other choice, manages to get a pocket knife out, and he stabs the guy a few times in the side before it's knocked out of his hand. 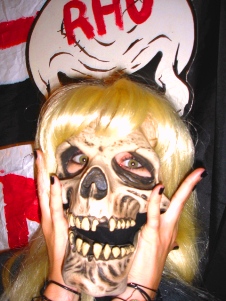 So because of the disturbance in the street, in a mostly secluded area, during all this someone else drove up on the commotion, and called the police.

They show up, get both of them separated, take statements as to what happened and...

So now Mike is facing jail time, and he and his wife are devastated. Their only hope is that the judge takes leniency on him, but it doesn't look good.

I tell them how sorry I am, give them my best and what not... and they leave.

So you might think it's over. NOPE. THIS is where it gets interesting!!!!

So Mike and his wife leave, and I get back to my photos.

Guy says he needs some photos developed, and I say sure, no problem. Then he asks if I'm squeamish.

Fortunately, not in the slightest, I tell him my gorey qualifications, and he says great, cause he wanted to make sure to tell someone in case they were freaked out.

So he tells me that the pictures might be unusual, because, a few weeks ago...

HE WAS IN A ROAD RAGE INCIDENT, AND THE OTHER GUY STABBED HIM WITH A POCKET KNIFE.

... Let this sink in people. UFC is now standing before me.

Between the time that Mike left, and UFC showed up, took less than 60 freaking seconds. They were within 50 feet of each other from the door, and didn't know. A small delay from Mike, or UFC getting one more green light, and they would have seen each other.

I immediately realize this, and mentally I'm in shock, fortunately my mouth kept working.

So he tells me his side.

This guy was driving recklessly, and tailgating UFC, so UFC pulled over, and Mike pulls in front of his car, blocking him from going forward.

Mike gets out of his car first, comes back to UFC's car screaming obscenities, and since the windows open, Mike reaches in, unlocks the door, opens it, and manages to pull UFC out.

They start fighting right in the street, and UFC managed to push Mike down a few times, telling him to stop. That's when Mike pulls a pocket knife on UFC, (not while pinned) and lunges at UFC.

UFC and Mike fight, UFC gets stabbed three times, and then manages to get the knife out of Mikes hand. Mike still tried going after UFC, and UFC was having trouble controlling him, so UFC had no choice...

He had to lay into Mike, so that he would be subdued a bit.

Fortunately, the police said the stab wounds matched UFC's version of events, and they believed him.

That, and when the police showed up, it took four of them to restrain Mike, who was still raging.

I say that's awful, I hope everything turns out OK, photos will be done in an hour. 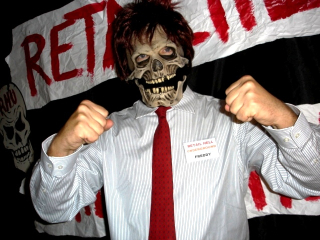 So UFC leaves, I call my store manager over, tell her what happened.

I tell her that for the first time in my career, I'm taking a 15 minute break, and I'm not keeping track of the time.

Thank god I have clients now.

Last I knew, Mike was sentenced to a few years in jail.

I still can't believe Mike was sentenced to jail when he was the victim!

Did you just stop reading the story half way through and skip to the last line?

Or was that sarcasm?

Still kinda hard to decide who is the victim, both could be lying, and both are believable....

Hopefully it's UFC and justice was truly served D: