RHU Pet Peeves: This Is Why We Call It Retail "Hell" 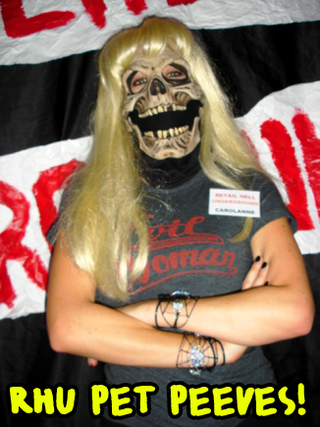 I've got a list of pet peeves and annoyances for you. I work in a coffee shop in the City of Brotherly Love.

UGH I had these asshats a LOT. "You want Starbucks, GO THERE!" I wanted to say that all the time.

Then there was this dude who seemed to latch onto me at work. He would always wax poetic about how Fox News wasn't biased, and Rush Limbaugh wasn't really that terrible, and people on welfare were leeches, and I shouldn't be a big evil lib'rul, etc.

I would give him my best blank "fuck off already" stare, cut him off to help the next person in line, and do my best to move him along. Apparently this was too subtle, as he kept doing it. I finally told the manager that I was no longer going to serve him and that either the manager booted him calmly, or I would boot him at the top of my lungs.

The next day, his buddy shows up. How do I know this was his buddy?

He comes straight to me and goes: "[Dude's name] thinks you were the one,and he is really sorry for being an ass. Would you please talk to him?"

I laughed in his face. Then told him that his buddy had never so much as dated me so he didn't even know me, much less form a real attachment to me. Finally I told him I had no intentions of dating a jerk who kept tying up my lines and interfering with my job. "Tell [Dude's Name] that being paid to be nice to people does NOT make me interested in him."

I got another sanctimonious prick months later. I was having a rough time in my personal life; most of which were completely out of my control; and although I was putting on a polite facade, I was looking a little ragged.

The sanctimonious prick orders his drink, then looks me in the eye and goes, "You look like you're going through a tough time, so here's a 10% tip and some lovely advice to make up the other 10%!! You'll make better choices next time!" [huge ass smug grin]

Being frazzled as I was from personal issues, this backhanded way of telling me my personal problems were all my own fault due to choices I had made tripped a small switch. I gave him the most dead eyed, soulless stare I could muster (to this day I wonder how terrifying this must have looked with the bags under my eyes, because his smile vanished and he actually took a step back from me), put his drink down with dainty precision, and keeping that dead eyed stare on him said politely, 'Here's your coffee, sir," in a voice I'm pretty sure would have given the devil goosebumps.

City of Brotherly Love my ass.

"[Dude's name] thinks you were the one,and he is really sorry for being an ass. Would you please talk to him?"
Dude doesn't even have the balls to come apologize himself? Even if you set to ignore him, if he came along with his friend and apologized himself, that'd at least be something.

"Tell [Dude's Name] that being paid to be nice to people does NOT make me interested in him."
No, no. Correct response is, Tell [Dude] that nobody cares about his opinion. Especially not if he shoves it down people's throats like a dick.

"(to this day I wonder how terrifying this must have looked with the bags under my eyes, because his smile vanished and he actually took a step back from me)"
I will imagine you looking like Sirius post-Azkaban; skull-like.