One Stop Shop
Crazy Receipts: How Friggin Big Is The Quesadilla, Anyway? 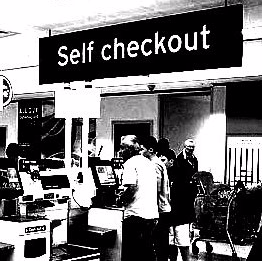 I work self-checkout at a grocery store. Our store offers customers a coupon for 5% off their next purchase when they get enough "points" which you get by spending money with us. This is important.

A couple days ago an older guy came up to the self-checkout units and headed over to the one I was putting bags on (sidenote: there were 4 other open SCO registers he could have used, why do people do this?) and he told me to get out of the way. I had just finished anyway so whatever.

So I head back over to my area and he goes through his transaction, cursing and muttering at the register the whole time. He finally gets to the end, and a message pops up asking if he wants to redeem his points for a 5% coupon. He hits yes, so now a coupon will print out on his receipt that he can use for his next purchase. He stares at the screen for a few seconds, turns to me, and says "it said something about a five percent!"

Me: Oh, that comes out as a little barcode on your receipt and you can bring it in next time and use it as a coupon.

Honestly the way the message comes up is a little ambiguous, so most of the time as long as people aren't being an ass I'll just put it in for them even though we're technically not supposed to. However, as this guy was being rude the whole time, I'm doing the bare minimum for him and going by the book.

Me: Yes, sorry. It's for your next purchase.

OG: But it said I could use it now so I hit yes!

Me: Well the machine's wrong

Me: Yeah I know, I'm sorry about that.

Around this time it started getting busy and all six SCO units were in use and I could hear the beeping from the alarms on my computer so I had to get back. He was kind of just staring at me not saying anything so I thought we were done and I walked back over to my area.

Me: I'm sorry, I don't have any control over what the machines say.

At that point he turned back to his register and paid. As he was walking past me on his way out I told him to have a nice day and he told me to fuck off.

"Me: Well the machine's wrong"

No, it was the loose nut at the keyboard.

At that, I showed him the power of turning the other cheek.

No, it fucking isn't. Your lack of understanding means nothing to me.

I used to work at a drycleaner. The drycleaning process, once you put the clothes in the machine, only takes 1 hour. Therefore, the sign outside said '1 hour [company]'. However, we processed clothes in batches. White load, black load, red load, etc. So if you brought something in expecting it to be ready in exactly 1 hour, you were shit out of luck. You had to wait for the next load of your item's colour to go in.

I could not even begin to count how many people complained to me about false advertising, and demanded I change the sign. Yeah buddy, I'll totally change the sign just for you. I'll make it my absolute first order of business after I get promoted to CEO of the entire fucking company. But at the moment, I am a FUCKING CASHIER. ENTRY-LEVEL FUCKING JOB. YOU THINK I HAVE ANY CONTROL OVER ANYTHING ON THE GODDAMN MOTHERFUCKING SIGN?!? Cashiers control jack shit. We exist to take your money, and nothing else. Don't complain to us how corporate works, complain to CORPORATE how corporate works. It still won't change anything, but at least you won't be making someone miserable when the only crime they've committed is trying to earn a living.

While I agree that the cashiers can't change anything... calling a business 'one hour' anything and it takes longer than one hour to do its thing means it's badly named.