20 Things Customers Shouldn't Do
Customer Reject of the Day: Grapes vs $12 Tiramisu Cake

Religious Freaks Encounters: Yes, Praying In The Middle Of A Crowded Hallway Is, Indeed, A Fire Hazard 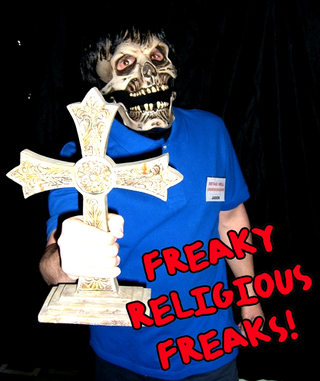 We were preparing to clean the largest theater in our building which was showing Son of God, as it was clearing out a big group of people began to say a prayer in the hall.

Now, I'm not one to judge or discriminate on when and how you pray. If you feel like it's time to give prayer, you can be my guest. The only problem is that praying in a large group in a small hallway in a crowded theater is a massive fire hazard, as it would block the path to the exit. This was an interesting situation though, as neither me nor my coworkers wanted to break up a prayer group.

I mumbled to my coworker "should we tell them that's a fire hazard?" and we were whispering to each other about it as the prayer went on. However the theater was practically empty and we could tell it was almost done, so we just let it happen.

When the theater finally emptied out I went inside to begin cleaning while my coworker went to get trashcans. As she came back she told me that the group had heard us whispering.

Apparently as she was walking back one of them yelled "PRAISIN' JESUS AIN'T NO FIREHAZARD!" at her.

Evidently you guys don't whisper as quietly as you think you do.

It is a fire hazard if you're blocking the aisles!