Religious Freaks: Tantrum At The Total 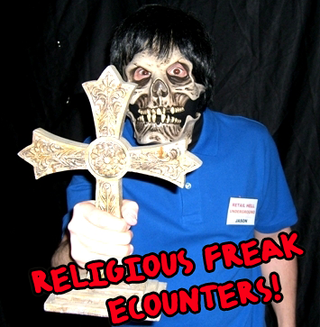 I live in, if not the buckle of the Bible Belt, it's at least one of the first holes. Some random woman came in (On a Sunday, to make it even better) and bought some random collection of crap that happened to add up with tax to six dollars and sixty-six cents.

She flopped down on the floor and started screaming and flailing and yowling about how we wuz SATANISTS!!! and GAWD was gonna get me for this!

I mean literally 'on the floor on her back, kicking and screaming and waving her arms toddler tantrum' Sadly, I didn't have a video camera, this being some years before cell phones basically existed, let alone became ubiquitous, as this would have gone viral on Youtube, I'm sure.

I ended up sitting on the counter watching her be an idiot and telling her that if she damages anything she'll have to pay for it too.

After a while, she wore herself out or figured out that I just thought she was an idiot and wasn't at all inclined to do anything about it, so she went and got a five cent piece of candy to change the price.

I honestly don't think I would have been able to avoid laughing at her. That kind of spectacle is just too much.

Yeah, I would've busted up laughing too. Might even have begun speaking in fake Latin and acting like I'm summoning Lucifer as well. I've had people be like "OMG,6.66?" and then go grab something else, but never a reaction like that

I think I would have just stopped and stared. But then again I'm not used to massive spectacles.

Being the evil little Pagan I am, I don't thing I could resist screwing with them, and I actually know enough Enochian and a little bit of Latin to make a pretty good show of summing the forces of darkness

I save any receipts that total £6.66 they make me very amused.

This was only the most extreme display of derpitude for that, by no means the only. By that time, I just wanted her to fuck off so I could mop the floor. She did save me a bit by cleaning the dried-mud floor right where she was. I hope she enjoyed all our heathen dirt...