It's All Fun And Games Until The 50th Kid
English Is Hard: Cue A Custy Demanding A Discount

Retail Hell Memories at an Organic Grocery Store: "Get me 12 gallons of milk!" 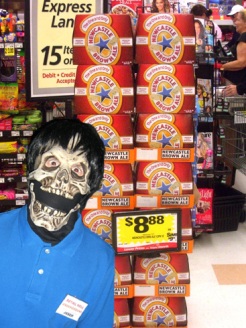 From thumbelinax8, Tales From Retail:

So I used to work at an organic grocery store where upper midd class families came to shop for juices. Generally, the customers were all considerate and weren't at all rude to me (I was a cashier), but there's this one man who showed up every couple of weeks with his, I assume, wife and he was a nightmare.

Every time he'd go to check out we'd all be praying he wouldn't come to us because he was NEVER pleased with anything. One day, it was because the milk that we had in the refrigerator was set to expire in about a month probably but that was WAY too soon for him so he came up to me to complain and when I asked if there was anything I could do, he demanded that I go in the back and get him 12 gallons of milk. I did a pained smile and told him okay and went to get a cart for 12 very necessary gallons of milk because my supervisor overheard and told him that it was "no problem at all". I came back with the 12 gallons and he had left the building because apparently I was taking too long (I had only been gone for a minute when he stormed off).

We all hate retail. Anyone who says they enjoy retail is a liar.

Misty, I do like working in retail except I have grown to hate this customer and I think she has worn out her welcome! She always comes in when it's super crowded with her undated price matches and some of them are old. I had my boss come over to help me with her and she said the woman was taking advantage of me and the company within this woman's earshot. I pray the customer stays away but she comes back like an allergy or a bad case of diarrhea when a food sensitive person eats the wrong thing! I wish all customers would be normal and not like her or this jerk and his 12 gallons. Companies should ban customers when they take advantage of the cashiers!

Agreed, BH. You should only be granted "Customer" status if you make the store money. If you cost the store money, either by being a demanding discount rat or causing turnover, or whatever, then you need to be banned from they store.
You are not a customer, customers make us money. You are either costing us money, or are a drain on our resources, contributing to cashier/employee stress.
Also, Thumbelina's story reminded me of that scene in Clerks when Dante is complaining about the "Milk Maids" the customers who come in and go thru every gallon of mild, as if somewhere, hidden amongst the milk, there is a magical container that won't go bad for like 6 years

TV, she does cause me stress with these price matches and she isn't honest about them. She even used a price match for Egglands Best when the price match was for generic eggs. I wish she was honest and would do her game elsewhere! She even waited for my 15 minute break to finish so she could be my customer and the crazy lady had ice cream! I don't even think being a cheapskate bothers her.