A Rant Against Gift Cards 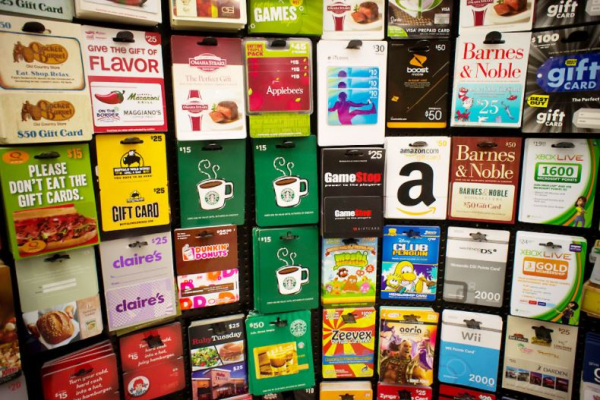 This is an unabashed rant against gift cards.

When I was a kid, a birthday present from a grandparent would often be a birthday card with cash inside.  Apparently this tradition exists no longer -- it's been replaced by the birthday card with a gift card enclosed.  There are even special-occasion cards with a slot built-in for the gift card!  Worse, the gift card gift has now made it socially acceptable to give "money" as a gift to any friend or acquaintance, rather than some thoughtful present.

So consider this scenario:  You go into some store, pick out, say, a $20 gift card for some other store or restaurant or whatever, and give it as a gift.  Now the recipient can use that card only in the specified store!  How is that gracious?  Cash would be better.

Okay, you say, so give them a pre-paid "credit" card instead.  But now there are restrictions where you can use these.  Or how about my experience:  I used such a "credit" card for a purchase that used up the value of the card.  I don't recall whether I trashed the card or whether the clerk did, but 2 weeks later when the item broke, the card was not to be found.  Nonetheless, the store put the money from the return back onto the gift card -- with no way for me to access it.

Then there was the time, just before cell phones were in every pocket, a parent gave his kids phone cards from the Post Office so they'd have a way of calling in an emergency.  Guess what:  the cards expired after a year or so -- unused.

And that proves to be a characteristic of all gift cards.  You pay money for a card that restricts the user where and how it may be used and expires if not used before some date.  This was brought home to one person who had been in the habit of giving such cards as gifts.  One recipient was her parent.  When the parent died, this person (the executor) found a bunch of unused and expired gift cards!

This person learned the lesson and stopped giving cards, but the cards seem no less popular than ever.  I guess you just can't fix stupid.

I'll routinely give my mother gift cards to the cinemas for her birthday/Christmas, but only because I know that she appreciates and uses them, so don't go to waste.

Doesn't hurt that my theatre chain sells them for 20% off at Christmas so there's extra value over the regular cash value, and I tend to stock up on enough of them to last my movie habits through the rest of the year too.

Gift cards are not as bad as you think.

First, 90% of cards got rid of that whole depreciation issue years ago and don't expire/lose money. The only time I have seen this recently is prepaid credit cards.

Also, birthday cards with slots for cards? Yet birthday cards that were designed for cash have been around FOREVER but I see no complaints about that. It's just another way to give money to someone.

My husband often struggles with his family during Christmas time because he always asks "hey, what do you guys want?" And always gets met with a shrug. So he gets them gift cards to places he knows they shop at/eat at. It's a bit more refined then shoving money in their faces and saying "here, i couldn't think of anything, so here's some money..." no, he took the time to figure out which gift card to get someone based on who they were and what they liked.

Also, a lot of people want gift cards. I just bought a house two years ago and I practically live at The Home Depot. If someone asks me what to get me for my birthday or Christmas, I will say a gift card to there. Why? Because I KNOW I will use it. I'm not about to ask my mom in law "I don't need a present yet, but if my plumbing breaks, can i count on you to buy new pipes?"

Cash says, "I have no idea what you like, but I'm obliged to give you something."

A gift card says, "I don't know exactly what you want the most, but I know you enjoy shopping at this place." It's more personal, and therefore a better gift.

Of course, this assumes you know enough about the person to know at least what kind of gift card they would appreciate. And if you don't even know that much, why are you giving them a present at all?

When I buy gift cards, I wrap them up in a small box. I satisfy my need to gift wrap that way. My brother appreciated the $40.00 gift card for Walmart I gave him when he turned 40 because he shops there a lot!

Yeah...no. Give me a gift card any day of the week. It's better than having to pretend that I like some gift that while thought out, is not something that I enjoy having.

Give me a gift card to any store in my city and I'm happy.

And all kidding aside, outside of phone cards, who the hell waits a year to use a card? I use cards up within months.

I'll give credit where it is due. The defective product is an issue. Yet I'll still take a gift card any day of the week.

My mom frequently gets me gift cards. I don't mind. She gives me cards to places I shop, or like to shop but can't always afford to.

My friend gave me a gift card to a fast food place I love, but don't splurge on. Hey, two meals, I was able to enjoy a treat.

I love gift cards to places where I actually shop!It means I can buy tbose silly things I wanted, but weren't important enough to spend "real" money on

Give cash every time over a stinking gift card. It's better if you know the person well enough to get a physical gift, but cash id better than a store locked card. I add cash all together and get what I need. I can't afford to supplement a gift card to buy something in every store for every card so I can use the total. Thank God they have places that buy the cards for a loss to you, and let you get something from where you want now.