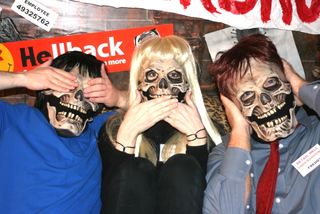 Kelly is every high school misfit's worst nightmare. She's the one who got by on makeup, hair styles, and dating some jock. The problem is, she's not 16. She's not 18.  She's 32. She is the social queen of the office and she irked me the instant I entered the office for the first time.

I was dressed in business casual for my first day. I come in, meet the guy who's going to train me and he walks me around, introducing me to a few faces that I'm going to be working directly with. As we meet and greet, I hear a sound that sets my teeth on edge. Girlish tittering.

I turn around and see Kelly for the first time, standing in the break room with another office girl. They make no secret about their elevator eyes looking me from hair to heels, then lean together and whisper behind their hands. Then they titter again.

He pulls me into a corner and looks me dead in the eyes. "Have you ever seen the movie Hot Fuzz?"

This is such a non sequitur that I kind of gape at him for a second then admit that I haven't.

Trainer: "Right. Well, it's a movie plot point to have a notebook and pen on hand at all times, and write down EVERYTHING that is said."

He tugs a small notebook out of his pocket and presses it into my hands. "The one in blue is known as Kelly. I don't care if she says nothing but, "Good Morning," to you every day for the next twenty five years. Odds are, she won't, but even if that's all she does, note it, date it and time it. Right in front of her face if you have to. She fears nothing... Nothing but the pen and paper. Any questions?"

My trainer gives me a pained smile, "Just remember what I said. Kelly needs to be put in her place, and often. She will approach you at some point, and try something poisonous. She's like a stupid little stray that keeps coming back, sniffing for scraps, no matter how many times you chase her away."

Thrognar's holy mother, RHUers... Here's just a few things I have written down that Kelly has said.

-"[Coworker] threw out the coffee so we're not talking to her today." (It was 2pm, the coffee was old and said coworker was seen percolating a brand new pot for everybody not even ten seconds later. Even if she wasn't, that's annoying not traumatic, so how childish can you get?)

-"Oh mah gawd, do you seriously wear THAT color to work? Honey, if you can't dress better than that, ask your mom to teach you fashion." (STFU and GTFO, bitch.)

She would also publicly and daily single out her favorites: they are the ones she addressed directly, the others she spoke to only through their line managers. Often, it was nothing but rumor, whose source was Kelly herself.

My absolute favorite rumor was one that I featured in... The copy room door got locked (electronic lock with keypad) and the code wasn't working; some glitch or whatever that the doohickey hiccuped over. Through some random events beyond anybody's control (some sort of road closure and construction), it took two hours to get somebody in and the whole office was virtually at a standstill. Two days later, a story began to float that I somehow glitched the lock by pounding on the keypad or abusing it in a tantrum or something. Funny, you think I'd remember that.

I made a point of laughing loudly and saying "What MORON told you that?!" every time I overhead it.

Then one of Kelly's clique, who was spreading the rumor, would splutter and not name any names and mutter incoherently about overhearing it "somewhere."

Our only blessing was that Kelly only had her clique. The whole rest of the office thwarted her troublemaking at every turn, notepads in hand.

I will say this... it's REALLY weird to be comforted by half a dozen heads popping up over cubicles whenever Kelly said something. Like, meerkats standing up all at once to stare at a hyena, you had several witnesses scratching away on their notepads from the first word she said.

Kelly was eventually ousted when she mistook some bigwig for a newbie and imperiously began ordering them about. Another coworker, also mistaking them for a newbie, swooped in on a rescue mission and gave the bigwig the same warning that had been given to me. It came out that everyone in the office was writing down incidents involving Kelly and some very Boss Level Bushy Eyebrows were raised.

Kelly wasn't the only one removed from the company either, as it was found that complaints that were turned in were being silenced or dismissed and prevented from going places where they should.

Got a tad cocky, Kelly?

I have a GM trainee at my store who writes everything down in a little journal. However he does not write down all the details. One day I was working one of my short shifts, just 3 hours until the night shift gal could come in. About 30 minutes before the end of my shift, he asked me to do a project that would take at least an hour uninterrupted, and several hours having to deal with custys. Of course I didn't do it, didn't even start, so he wrote in his book "Flutilicious refused to deep clean the coffee bar". When the SM confronted me about it, I asked if GMTrainee also said that he asked me to do that task 30 minutes before I was to end my shift and at the time I was busy mopping up a large spill from a leak under the drink counter.