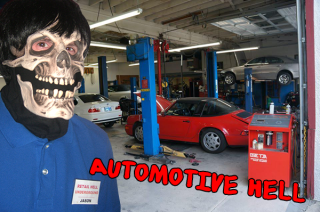 This was from a couple years ago when I sold cars. I'm omitting my first interaction with this lady to keep it relatively short, basically I inherited this crazy lady when an old store closed. My boss was the original salesman to deal with her and after she came in and told me our company had "stolen her car and she wanted the money for it" he relayed the origin story:

She brought her car in for some miscellaneous repair. Her car got fixed, then after the service department closed she brought it back saying it was acting up again. No big deal, that happens sometimes. She then refuses to leave her number with the salesman at the time (my boss now) because the service guys should have it on file.

Service department tries to contact her to see what's going on and can't get in contact. Time goes by and they can't get in contact with her in any way, and she doesn't return for the car. After a certain amount of time the service department puts a mechanic's lien on the vehicle and sells it. Turns out she left the country and came back TWO YEARS LATER and expected them to have her car there waiting for her. She was also seeking reimbursement for the bus, taxi, and rental car fees she had accrued over this time.

Now I have to go tell her, again that there's nothing we can do. So then I have to deal with her ranting about how we stole her car and must be in cahoots with all the lawyers in town because they keep telling her she doesn't have a case either. She refused to buy another car because she was under the impression that it would mean we won and she no longer had a case.....

The kicker? My interaction was 6 years after the original incident.

I have more stories with this same lady since I made the mistake of giving her a business card and somehow became her personal vehicle agent for the next year.

2 years of airport parking fees would add up in no time. Much easier to have you guys park it for free, and then come back and pay a very small mechanics bill in the end. How dare you want to use your lot space for something besides free parking for this very special customer.

At what point do you just say, "Fuck you, we don't want your business that badly"?