I work as a cashier at a pharmacy chain and we offer a savings card that gets you sale prices and coupons. Most of these coupons print on the bottom of your receipt, but others are emailed or mailed to you. These coupons are linked directly to your savings card and as such cannot be redeemed on any other card.

I have a woman come up to me at the register ready to check out, and I ring up her purchase like a normal time. It gets to around $400 and she hands me a "20% off your purchase coupon."

I tell her at normal speaking level that the computer is telling me that the coupon she gave me was not linked to her card, and asked if she may have signed up for another card in the past. You'da thought I killed her daughter. She immediately starts yelling at me, screaming that I'm embarrassing her, and that she's shopped here for over 10 years and has spent over 8 grand a year on this "hellhole." I tell her that as I'm pulling out a calculator that I will get the 20% off her purchase.

While she's huffing and puffing I make sure to tell her lots of sorries and I told her that this happens pretty often as there used to be a different owner of the pharmacy and their savings card credentials were imported into ours.

She ain't hearing it, after maybe the 5th apology from me she says very aggressively "Stop patronizing me."

I of course lock up, this woman has just told me to stop doing what I've been trained to do this entire time. I wanted of course to apologize for apologizing so much but I was able to figure that that might not be the best thing at this moment. About 30 seconds of silence pass, finally got all of the math done and she pays and storms out. 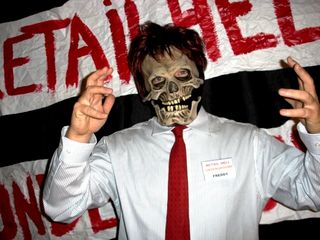 Chapter 2: The Next Day

I get called up to the front by the assistant store manager (who was there when Woman was awfully spicy,) I get up to the front and there's this nice looking older gentleman (hereby known as Man) at the front waiting for me. I say "Hello, how can I help you?"

Man says "Now what in the HELL happened with this coupon?! You embarrassed my wife, (while I'm thinking her yelling did most of the work for me, but I'm glad I still get credit) do you have ANY idea how demeaning that is?!"

I tell Man that it really isn't demeaning at all as it happens all the time and profusely apologize that she took it that way.

Spent about 5 minutes talking to the man. He actually could listen to reason a bit, but I do mean a bit.

Assistant manager comes up to me after that went down and says "Oh my lord, I had no idea he would be that mean. He seemed like a nice old man and politely asked for you so I thought he must be your grandpa or something."

I says to him, "For future reference, both grandpas are dead."

The woman flipped out, because she knew she was wrong, and was trying to convince you, herself and everyone else otherwise. She also had braced herself ahead of time for an argument, and was probably arguing with you in her head the entire time she was shopping. It wouldn't have mattered what you said once you mentioned coupon, because she had already decided what you were going to say and that was the conversation she would remember. Next time, apologise once. Then offer solutions. If she is still angry, wait until she stops ranting, say that you understand that she is upset by this issue and offer her tbe solution again. If she calms down, then yay, you can have a conversation. If not, it's time for manager or security, depending on your policies.
As for the Man, next time play dumb. Ask him what he thought was going on, listen politly, repeat back the important points and ask if that was correct. Then say something like, "Ok, I can see where the misunderstanding happened." She believed I was bothered about the coupons, when I was actually just letting her know what happened and how I could fix it this time. Unfortunately, since she became upset so quickly, it was difficult to explain the possible solutions. This is the solution I was offering...