Adventures With Cartie: After the 666th Hellspawn Vomits On You, You Look For Other Careers
Cinema Signage: When You're In A Rush To Get A Picture, But Forget There Are Several 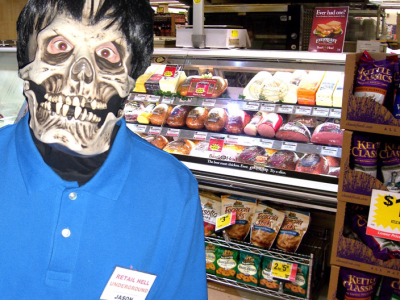 From Dollmakerfromaland, Tales From Retail:

This story happened quite a number of years ago, I haven´t worked in retail for a long time...

I was working in a grocery store in Sweden and this is the worst encounter with a customer I have experienced. I worked behind the deli counter and was approached by an old lady and her friend.

She wanted to buy ham and I started slicing it for her. When I was almost done she started screaming at me, calling me useless and stupid and a lot of other things.

What was my crime? You see, I had worked in another grocery store before and just started working at this one. At my old store we always stacked the slices of ham on top of each other, wrapped them in paper and folded all the slices once. At this store they apparently folded each slice separately before stacking them. And of course no one had told me this.

I tried to fix it but got screamed at some more for touching her ham. I was almost in tears when she finally left.

That's my story of the nasty ham-lady, who screamed at me because of the most ridiculous thing.

In the USA the deli doesn't fold your ham for you at all. I couldn't imagine asking the deli person to do something so time consuming. Fold your ham how you wanted yourself crazy lady.

Yeah, seriously. It doesn't taste different if you fold it before or after it goes on the sammich, get over yourself.

As long as they slice it like you want (shaved/slices), and it's what you want, shut up.

If this is in a deli then they are already touching your ham, and presumably wearing gloves for hygiene, so what's the big deal?

I can't imagine many deli workers have enough time to go around folding ham slices over serving customers and their other work.