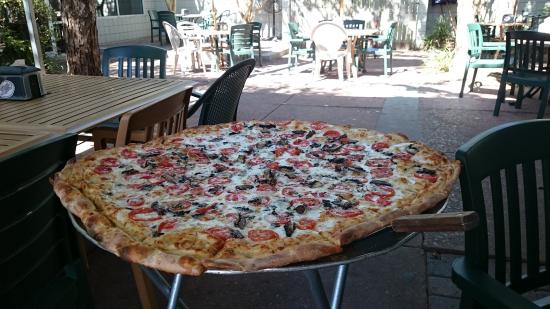 Had an encounter with crotchfruit at Momo's Pizza the other day. This place is adult oriented (a pizza pub) and not exactly Chukee Cheese's. 8 kids below the age 10 between two sets of parents who where sitting at a separate table engrossed in conversation about God (not hating, just like, wha??) and totally ignoring the kids. We are seated right behind the parents and right next to the hoard of babies.

The two smallest start chasing each other around their table, which is maybe two feet from ours in foot space. If you know anything about Momo's Pizza, you know their restaurant is small and their pizza is HUGE and they have to put them on a separate small pizza holder next to the table. Our giant Medium had just come out reducing the foot space to half a foot MAX between us and the tiny racers.

I stood up took two steps up to the parents, had to wave my hands to get them to look at me and said "you better do something or your kids are going to end up covered in pizza."

One of the mother's looked terrified of me. Then they finally LOOKED at the kids and got them to settle down. In hindsight, I realize what I said might have sounded like a threat. I did not mean that!! Just meant they were going to run into my pizza.

You had every right to say something to the parents! Are you a very tall man because short people can be amazed and intimidated by tall people. I know God wouldn't want kids playing in places that aren't playgrounds!

I always used to tense up all my muscles when a running kid was about to hit into me. I would be standing the kid would bounce back about 5 feet after the collision. The look on the parents face priceless.

I tend to full on scream if a kid ends up bumping into me with a soccer style reaction to getting fouled by another player. But that's because I hate unexpected touching and children, a lot.

Actually, I am a very petite baby faced woman. My hubs is like 6'4", but he is not the scary one. LOL