Poor Planning: Totally Doesn't Look Like Herpes When You Zoom Out
Yard Sale Signage: Little Brother Spices Up The Sign

Retail Hell Memories: "I will use the checkout that isn't working and you can't stop me!" 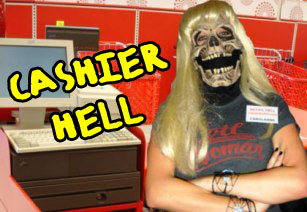 From nuclearfalloutshamx3, Tales From Retail:

I work in the UK and at one point I was working for a well known supermarket store. This happened in October 2016, it was my first retail job and I was pregnant at the time.

The clocks had gone back and of course the majority of our card readers had gone down. I was lucky and was sat at a register where the card reader took sympathy and actually worked. This left me with a massive queue and a lot of disgruntled customers.

Most customers seemed happy when I apologised for the wait and explained the circumstances, they wished me luck for the rest of the day. Another colleague came over to take me off for my lunch break so I waddled away with my bump and sat with a drink in the cafe.

Another colleague came to me and told me how the till system had to be reset which would leave customers waiting ten minutes or so whilst the systems rebooted. I sighed knowing my lunch break would be ending in about 10 minutes so I prepared myself for the angry customers.

I got back to my till and the colleague who took me off was half way through serving a customer who had bought half the shop so I stood beside her and made conversation with customers.

The colleague behind me called me over and told me he had run out of till roll and the machine wouldn't print off receipts. I asked my supervisor if we had any in the stock room and she said no, she would have to go to the back offices but she told me to get my colleague to close the till as we can't operate the till without till roll.

I approached the line of very angry customers and explained the till needed to be shut due to the till roll being empty. I also told them I was opening the till behind and they could gladly come to my till. Most customers nodded and grumbled but began to queue at the till I was opening. Apart from one man. My colleague was sat at the till waiting for the till roll, he had shut the barrier and turned off his till.

I'll be M, and the angry man will be AM

AM: No I want this till to serve me! I've waited in line for ages!

M: I'm very sorry sir, but the till is closed and cannot operate. You will not lose your place in line and I will serve you in the same time my colleague would have. 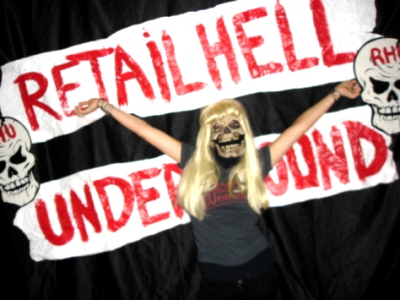 AM: I will be served here!

M: Well, no you won't sir. The till is closed now.

AM: Well I want to speak to your manager this is ridiculous.

M: Sir, I would also love to speak to my manger, but it seems they have left the shop floor to deal with the technical issues and complaints we will be receiving.

By now the man was slamming his items onto the conveyer belt that was still. A security guard placed themselves at the end of my till and the man approached my till. He pushed past the current customers and leaned over my till.

AM: Get on this till and serve me!

M: I can't do that sir, I already explained I can serve you at my till. My colleague is waiting for his till to be operational again.

AM: This is a fucking joke! I want to be served now! You're a stupid bitch you know that? Just fcking serve me!

I'd had enough, I was fat and hormonal, I didn't know whether I would cry and shout so I looked at the security guard who approached us with haste.

M: Sir, as I have explained multiple times I would have served you had you put your items on my till. Instead you screamed and shouted at me. So now, nobody will serve you. You can leave on your own or my colleague here will escort you out.

The man laughed until he realised we were serious. He grabbed the basket he had his items in and threw it at me. I ducked behind the till and then rose to see security had grabbed him.

AM: She shouldn't have provoked me it's her fault!

M: I never provoked you, there was no need to be so rude! Instead of probably being on your way home by now you're now going to be barred from this store. Well done.

Security went off with him and my colleague turned to me and asked if I was okay, I was shaking as I hated confrontation but I snapped. I nodded and apologised to the customers in my queue, who were all lovely to me.

One man in my queue used to work at the store I was at and said how well I handled it and how he probably would have thrown the basket at the mans head.

I later found out from my manager that the man had in fact been banned from our store and the other local store in our chain because of the incident. It was fun to see him try and enter our store only to be told to leave by security. I couldn't help but smile from my checkout as he was forced to leave!

I still don't get what's up with people sometimes. It's almost like they never grew out of childhood!

I wish you had called the police on this giant baby.

"And you're guilty of assault. I will be taking a restraining order out against you, and if you come near me again, I'll be pressing charges"
In a perfect world, anyway