Scams and Scammers: Great Advice From a Cashier On How To Spot a Quick Change Artist 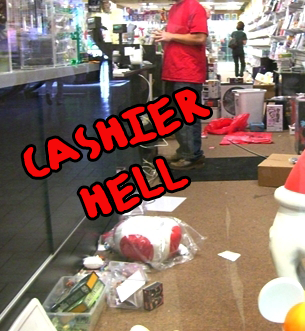 From goldminevelvet, Tales From Retail:

I asked if he any smaller bills, he said no and so I punched it in after checking if it was counterfeit or not(it wasn't).

This is the part where it gets confusing. He said something like "Oh you said 6.59? I might have change for it." This is while I was getting his change out. I told him I couldn't do anything since the transaction in the mind of the register was done. He kept telling me to void the transaction. Somehow in this he got his $100 bill back, not sure if he grabbed it out of my hand or what. But I saw him put the $100 bill in his pocket.

This is where I stopped. I said I would give him his change back but he needs to give me the payment first. He said that I took it. I said "I did but somehow you got it back". I even double checked my drawer. He reached into his pocket and pulled out his wallet and a few bills saying he doesn't have the $100.

I call my manager up and of course before she comes up he finds it in his pocket. I explain the situation to my manager and by this time I had put his change back into the drawer and closed it(I had not given him anything).

After my manager spoke to him he muttered something about going to his wife and getting a smaller bill or something and then left.

I've heard about quick change artists and wondered how people could get caught in it and now I know. If he was successful he would have kept his $100 bill and his $93 in change. It's a lot more confusing when it happens.

The fact that I was going to give him his change back and he was making it confusing was a big flag looking back on the situation.

My manager said that I did the right thing by calling her up. She always says if it gets confusing then call a manager up and they can pull and count down the drawer if needed.

My tip for people is after you punch in the numbers to the register just give them the change it says on the screen. A lot of customers try to give money after the fact because they don't want to deal with loose change and I would do it rarely but after this I won't.

Proper cash register procedure is to not pull out any change until the payment is firmly under your control, and out of reach of the customer. This is not always easy, and many places do not provide proper training.

Our cashier's *can't* void a transaction. It requires a manger's override.

We don't get too many change artists any more. (And since the local county fair went "no cash" payment cards, we don't get many counterfeit bills any more, either, as the carnies don't handle cash at all.)

Yep. And also never put the bill in the drawer until the customer has his change. Can't even begin to count the number of times I've had people pull "I gave you a 20" or I gave you a 50, or whatever. That pretty much falls through when you can show them the money resting crossways on the register drawer. "Nope, I've got the bill you gave me right here. No worries, happens to everyone from time to time"

The one and only time I had a quick change artist, I did play along, but by my rules.

He hands me a $50, and I put it crossways in the till while I gather his change. He says, hold up, I have a smaller bill. So I finish counting his change in one hand, take his smaller bill and count up all the change so it adds up to something like $51.05. I put the change back in the till, hand him his original $50 bill and the rest of his change.

Of course, while I'm doing that, he's trying to distract me by saying he wanted to give me a larger bill so he could get some convoluted combination of bills. I ignore him, hand him his change and then ask what it was he was trying to say while I was concentrating on getting his change back correctly.

Essentially, all I do is complete their transaction and then treat everything after as if they were just asking for change. They can keep trying to trip me up, but so long as I don't let them interrupt, I can't get it wrong.