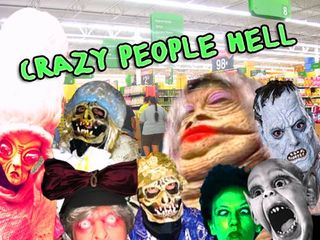 I used to work at Mellow Mushroom which is a very popular, busy pizza place.

One day a family of 4 came in, demanding to sit at a specific booth. The server greeted the table and took the drink orders.

The man at the table came up to the hostess stand (where I was standing) and he freaks out and starts yelling at me and saying they haven't gotten their drinks yet (it's only been a minute or so, keep in mind we are a very busy pizza place).

As he is walking over there, the man at the table stands up and yells "THIS IS BULLSHIT I HAVE BEEN WAITING FOREVER FOR MY FUCKING DRINKS!" He then proceeds to walk over to me again and yells, "WHERE IS YOUR MANAGER?!"

I hurry and get a manager and she comes and tries to explain we are very busy blah blah blah.

The man starts yelling that he is going to strangle the server and is going to come back and kill him with his bare hands (saying this in front of his 2 children, no less).

He was REALLY mad when, instead of having his pizza magically materialize, two police officers firmly informed him that it was time to leave the premises.

Karma got him in the end!