Editor's Note: Heads up RHUers, few tales make you want to commit murder while crying your eyes out. This is one such tale. :( 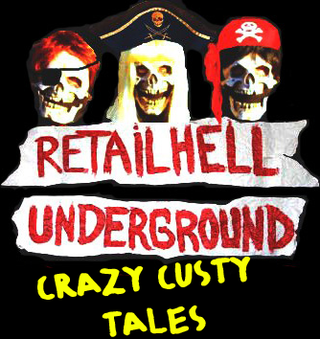 I used to work in a store as a cashier. This was before self checkout lanes were a big thing. So I am working the high speed 10 items or less lane when a boy around 12 comes up with a fighting fish. This fish was beautiful. It had the perfect shade of purple body and blue tip fins. So I ring it up. Comes to $5 (I think a it was just less than $5 like $4.98 or something, it was 7-8 years ago).

Now the boy puts $2 in quarters down on the table. I tell him its not enough. that he need the price on the register. Gives me the puppy eyes, I'm just a kid routine. no dice. I tell him I will keep the fish until the end of my shift then it goes back with the go backs. Full disclosure, I had no intention of putting that fish back on the shelf, once my shift was over (less than 20 minutes at this point) I was buying him and bringing him home. I had 2 other Fighting fish (NOT IN THE SAME TANK) and this guy was beautiful. I had named him Fuchsia, because that was the pink/purple/blue that he was.

Now here comes the sad part. The boy comes back with what I believe was his mother. I say I believe because I really hope that he was not living with this mental case.

$Her "I want the fish, why did not not sell him the fish"

$Me -I explain the cost of the fish, and that he did not have enough.

$Her "Here is you money now give me the fish!!" drops random amount of coins on counter.

$Me -sadly rings up fish, counts out money, they have enough, hands over fish, change and receipt.

$Her -Takes fish, looks at me right in the eyes, opens cup lid, dumps the water and fish on floor, then stomps on it.

$Her -"Now no one has it!" She drags her shocked little boy out the door.

I died a little inside, since now I had to close my lane and clean up my could have been Fuchsia and explain what happen to the manager on duty since the crazy lady called back to complain about me.

Just an update, this happened 7-8 Years ago. No -The woman was never arrested, I never saw her again in the store or anywhere else. I had to guard the spill until a maintenance worker showed up. I was not able to bury the body since removing it from store grounds was "stealing".

There are not many stories that make my heart clench and my stomach turn but this one absolutely did.

That hideous creature needs to be stomped on with a size 2,000 boot and see how it likes it. Vicious, fucking piece of shit.

I would have been in tears... or punched her out, not sure. Animals always get to me.

Sad to hear. I've never ran into such beasts when I worked there (Toy Dept.), but I have been there when Pet Associate brought over fish that tried eating fish hooks that some B#####D dropped into the tank for kicks.

Out of curiosity, why wasn't burying the fish an option? It sounds like the fish was indeed paid for already.

I'm guessing that the mother had been nagged for quite some time about getting a fish and the kid getting upset about not having enough money set her over the edge. Not excusing her behavior, but still...

Everyone, I wish John Coffey of "The Green Mile" existed and he would have used his powers to bring Fuchsia back to life. Then he would put his mouth on this woman's mouth and breathed into her and what killed Fuchsia would take her down! I am being genuine when I write this!

"You have no soul for not selling my son a fish at less then half the real price, so I'm going to kill it in front of him! That'll show you!"

Seriously, that's goes beyond spiteful and straight towards evil. That poor fish, and that poor kid who has to live with a mother like that!

*quietly picks jaw up off floor, offers handkerchiefs all round*

That mother has a special place in hell reserved.

WTF is WRONG with people?! ;_; I'm sure I would've been cursing quite a bit if I saw this horrible person.

I've had nearly 24 hours to process this story. I had nightmares about Fuchsia last night.

Calling the police on this woman for animal cruelty seems to have been the best option. That, and get your manager to ban her from the store.

I'm sorry you didn't get to give Fuchsia the burial he deserved, and I hope you find another almost as beautiful one day. <3

This breaks my heart. You just witnessed a future serial killer right there. :(

I'm so sorry you had to experience that, EchoGecko. D=

Poor kid, poor Fuchsia, OP, you have my sympathies to witness something like that. Words fail me, that a grown adult could do that to a poor defenseless little fish