Fun-To-Mental: This Is Supposed To Attract People, Right?
Unforgettable Store Names: I Am Not Comfortable Having You Work On My Mouth

Retail Memories: Bird is the Word 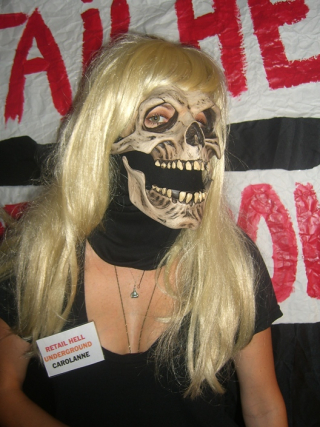 Back in the 1970s , I cleaned homes as a second job. It was a pretty good gig, you worked alone and set your own hours. I did a brisk business for clients who had pets , some cleaners were wary of taking on those assignments because of allergies or they were afraid of animals. Because I also didn’t mind households with exotic pets I was often first pick. During those years I met many amazing animals that I still think fondly of today. There were the usual cats and dogs, fish , birds , hamsters and tiny turtles, but the exotics were something special. From ferrets named Doc and Dolly to Sizzles the boa, Heckuba the tarantula and my brave little pal Edie the capybara, who bit the leg of a burglar. …and then there was Murray, a mynah bird who once belonged to a close friend. Murray lived in a ground floor apartment in a large pre-war residential building. He had his own room and was quite the bird about town. May considered him her housemate. He was very vocal , but it was his way with mimicking that amazed. My friend May was a secretary for a large corporation and often asked me to clean in the late afternoon before she came home from work. Murray would squeak and trill , repeat a command or learned phrase while I went about dusting and straightening up the apartment. He would also imitate sounds from the radio, television, other birds outside and household sounds like a blender, vacuum , telephone / doorbell ring or squeaky door. In fact he was so good at it that he’d often make the sound of a ringing telephone while I was in another room.

May spoiled Murray with attention and special treats , he was top bird. Murray was also the jealous type who would often intimidate any guy she brought to her apartment. Many would be suitors were pretty much run off by a screeching Murray, who would use his vocal arsenal to get rid of all male competitors. May was seeing this one guy , who I’ll call Jerry. Jerry was a bit self- important , a sous chef at an upscale Manhattan eatery. He was always broke , but had money for pot , beer and sports betting. He didn’t help with the rent or food, but May was smitten. Things were getting serious and Jerry moved in, only Mays very strict religious parents didn’t know about that. Jerry had lousy habits. He was a slob who believed he was too good to pick up after himself. I ‘d often come in to the apartment finding beer cans and cigar butts all over the place, not to mention sticky underwear on the bathroom floor and plenty of hair in the sink, that guy sure was hairy.

Jerry hated Murray and I’m sure Murray wasn’t too fond of Jerry either. Anytime Jerry and May argued, he’d threaten to harm Murray. When May's parents visited, Jerry would make himself scarce, storing his clothes and toiletries in his car until they left. The subterfuge lasted until one day while I was cleaning, May’s mom showed up early. I told her that her daughter would be home in a about half an hour , so she sat on the couch and waited. Murray started making strange noises, first the sound of a creaky door, then another creak, the sound of streaming water, a burp…then an all too human aaaaahhhh!!! May and Jerry came home and May quickly said that she had met Jerry on the subway and that he escorted her home. Ever the gent, Jerry excused himself and went to the bathroom. There was the sound of a creaky door, then another creak, the sound of streaming water, a burp …and the all too human aaaaahhhh!!!. The jig was up…Murray was imitating Jerry’s bathroom ritual! May’s mom was livid. Jerry quickly realized he was about to lose his free digs and explained that he and May were engaged to be married. Unfortunately the story doesn’t end well. Murray got evicted, he was donated to a zoo. May and Jerry got married. The marriage didn’t last a year. Murray turned out to be the better housemate after all.

My girlfriend, and by default now I, own a Cockatoo. This bird can mimic the call of a Sea Gull or dog barking or just scream at the top of his lungs for no reason. When he wants to be nice he is the sweetest animal in the world, but if he decides "I'm going to be an A-Hole", then he can make your life living hell. He has bit all of us multiple times, sometimes drawing blood. An intelligent bird can learn and repeat things it hears over & over, so we are always careful with what we say around him. Unfortunately one of his previous owners were not so restrained because he can also curse like a sailor. If we ever have to get rid of him, it won't be to a pet store or zoo, we would find a re-homing shelter like my girlfriend got him from... She was just supposed to foster him when the shelter needed room, that was about 10 years ago now. If May would have turned Murray into a shelter, it is possible that after Jerry left she could have gotten him back.

Birds make amazing roommates, they really do. Parents and I used to own two lovely African Grey parrots who chatted up a storm and imitated everything, a handful of macaws, 40 cockatiels (yes, you read that right - we turned an entire bedroom into an aviary, basically), a painted conure, and I can't for the life of me remember what sort of conure it is my sister had except that he had an orange head...they were all wonderful. I'd take birds over people for roommates any day.