Fun-To-Mental: Uh, This Could Have Been Thought Out A Little Bit Better
Unforgettable Store Names: You Don't Know How Pregnancy Works, Do You? After seven miserable years of working at The Order, I finally escaped a few months ago. That means I have a major backlog of stories to send in, which will be coming in the future. However, the story I have to tell is what I am proudest of: how I managed to quit my job in a way that screwed over as many people as possible.  And they didn't realize it until the last possible moment.
The last year of working at The Order, things were just getting worse and worse. I was having more work piled on me. People weren't being trained to handle anything other than basic cashiering because it was expected that I could take care of it. In any given day, I was likely to be doing multiple of the following: regular cashier work, covering the coffee bar, basic stock work, taking down delivery orders over the phone (for the technophobes who didn't want to use the online order form), putting together delivery orders (placed either online or over the phone), and training new cashiers. Yes, you read that right-- it wasn't uncommon for them to have me scheduled to train a cashier and still have to do at least one or two of those other tasks.
More than once, I would show up half an hour early to one of my later shift days, hoping to grab a coffee and a few minutes of peace and quiet so I could mentally talk myself up to dealing with whatever shit storm the day would throw at me. And inevitably, I would be asked to clock in early because there was no coffee bar mid-shift person scheduled (because they didn't have enough people trained on it to schedule in), so could I please clock in and send the coffee bar morning shift person to lunch? (Never mind that one of the managers on duty could have stood back there for the whole half hour, or that I wasn't due to clock in for another twenty minutes or so.) 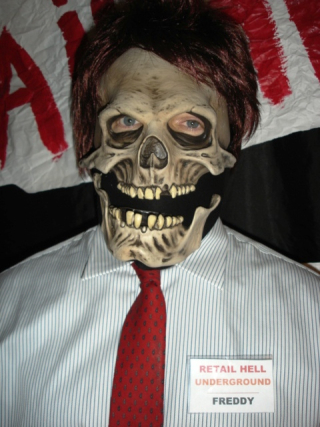 A typical day would often run something like this:
-Clock in (often for opening shift or one of the morning shifts)
-Take care of delivery orders
-Get called up front to deal with sudden influx of customers at least once while trying to deal with said delivery orders
-Get orders together
-Start ringing them up on a manager till
-Stop at least once to ring up customers on my own register
-Get called over to the coffee bar so the morning shift person can use the restroom
-Get back to my register, and ring people up
-Stop to take a grocery order over the phone (that's easily 15-20 minutes, often more, depending on the customer)
-Try to get the phone order put together
-Get called back to register to deal with more customers because the other cashiers aren't going fast enough
-What, no coffee bar mid-shift person? Guess where I'm going.
-Back to my own register
-Lunch
-Ring up customers at my register
-Get asked to stock cart of wines
-Get back to register after stocking wines
-Finally finish for the day, exhausted and miserable
And then... something akin to a miracle happened. My better half's financial situation improved enough to where we could buy a house. And he wanted to get me out of that hellhole. So, we began looking for a suitable house in a nice area well away from The Order, too far to even remotely consider working there any longer. After a lot of searching, we finally found a suitable house, made a bid, etc.
My better half told me that I could quit working at The Order whenever I wanted. But after seven years of suffering, I didn't just want to simply quit. I wanted to make people suffer. I wanted to give as big a “fuck you” to the store as I could, without it being overly obvious until the last minute. And I figured out how to do it.  It was all too easy.  My plan rested on two simple facts: 1. They made the schedules only one week at a time, without planning much further ahead.  2. They still had not trained any extra people to handle any of the duties that I had been doing for so long.
In roughly a month, there would be a major local holiday, big enough to where the weekend leading up to it was more or less “all hands on deck.” They would need every person they could. Not a single person could be spared in the days leading up to it.
For another two weeks, I sat tight on my secret. Exactly two weeks before my perfectly chosen last day, I came into the store with multiple copies of my resignation letter, making sure all of the managers got a copy. The responses I got were along the lines of, “Oh, no, it's a shame you'll be leaving us, but congratulations on the new house!” So far, so good.
The last two weeks went quite smoothly. My last day was awesome; it was probably the easiest day I'd had in ages. Everyone stopped to say goodbye to me, and I got a lot of gifts from people I'd worked with for a while.  It was clear that I would be missed.
Ah, but the punchline. The sweetest part, which I had banked on. The schedules were only made one week at a time. And they still hadn't trained anyone else to handle my duties, despite being given notice. It meant that they were about to deal with one of the busiest weekends of the year... without one of the fastest cashiers, anyone to cover the coffee bar for lunch, and only one person to handle the delivery orders. And they had been given two weeks notice in writing, so they couldn't even blame me.
I only wish I could have been there to hear the scheduling manager cursing when she made up the new schedule and realized how I had screwed them over.
--Stepford Snarker

I'm sure there was much wailing and gnashing of teeth... but YOU didn't screw them over. THEY did. They did it to themselves, after using you for years... you just moved out of the way and let the dicking pass on to the ones who deserved it. Congratulations. :D

It was great when ma retired from 40 hours a week. A new head of the organization had been in place a couple months and new his girl friend could do the job as part time and he had been hurry up and leave. The girl friend quit after a couple weeks and they had to hire a full timer and a part timer to fill the position for 60 hours a week. They had to hire an auditor temp to get them back in compliance with many things they were not doing.

Bwahaha. Awesome karmic payback. TT is absolutely correct, they screwed themselves epically, you just set them up, they knocked themselves down. Their general douchiness and taking their employee for granted came back on them, and congratulations on getting out of that hell hole

They got what they deserved!

Hah! That is awesome. I hope they seriously regretted everything. :D