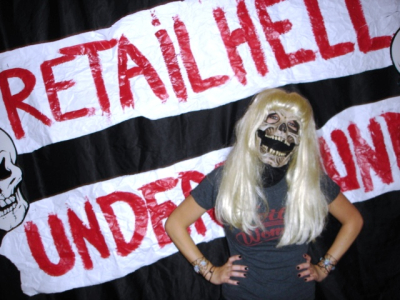 You'd think this would be common sense but maybe just maybe customers shouldn't threaten to hit employees because there isn't a discount.

I work for a university bookstore so I constantly get asked if there is a student discount, (no there isn't, if there were 99% of our sales would have to be discounted so we'd have to raise prices there by making any discount entirely pointless).
I had an old woman come up with a breast cancer t-shirt and shared with me that she'd survived breast cancer, very sweet and touching. But when she asked if there was a student discount because her grandson was a student and I said no she said "I ought to smack you!" and mimed smacking me. Then she laughed.
Her grandson came up the register, asked if there was a discount and again I said no. Grandma once again said "I ought to beat you for that," and laughed again.
In total she laughingly threatened to beat me up for not having a discount about four times. The first time I thought it was a little weird, by the fourth time I was downright uncomfortable. I honestly think she meant it as a joke, especially since I don't think an old woman would have been able to do much damage but I'm a short young female so I'm not exactly someone who could defend myself for long either. All in all it just made me incredibly uncomfortable to have someone, even an old woman, threaten me bodily harm four times within two minutes.
Just don't do it guys. Seriously.