Meanwhile At The Thrift Store: This Is Just Sad
Halloween Costumes: Lawsuit Avoided

Monstrous Customers: "Your Jewelry Selection Is Too Cheap For My Taste."

I work in a popular retail store in the States. More specifically, I have worked primarily in the clothing department for 3 years. My store is geared towards middle class family's but occasionally we will get the upper class snobs. This is where my story begins.

It's right before Christmas and I'm working in the jewelry (+ a few) department(s) that day. When you work in jewelry you have to have a pair of keys on you in case a shopper wants to look at something inside a case. Anyways, I'm putting away some items in another department when I get a call over the walkie to assist a guest at the jewelry booth. So I go up and see a man probably in his 40s with his two teenage sons, the oldest could not have been more then 15 and the other one just a little younger. This is how the next half hour of life goes.

Me will be Me. AD will be Asshole Dad. NS will be older and nervous son. And YS will be younger son.

Me: Hello my name is moonlitcat13, how may I help you today?

Gee what a great start...

AD: See my son bought this heart necklace for his girlfriend here earlier today and when he told me the price I told him to return it and get something better for her.

This sweet guy bought his girlfriend a cute heart necklace for Christmas! How sweet is that?

Me: Oh I'm sorry, was there anything wrong with the item?

AD: Looks at son. Yeah it was dirt cheap!

Whoa whoa whoa, for one this kid could not have been more then 15 years old, therefore I highly doubt he had a job or if he did, one that didn't pay very well. Second, this necklace was about 25 dollars, something that I know when I was 15 was a lot of money at the time.

Me: With the best smile I can muster. Okay well, is there anything you see that you like in the cases?

AD: Points to a lunar moon necklace How much is this one?

AD: HMMP! Do you have anything that's more expensive?

Me: I'm afraid not really sir. 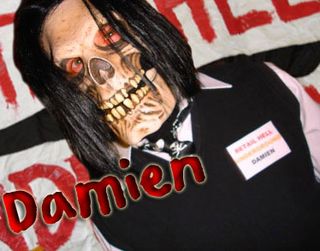 AD: Wow, your stuff here is super cheap! How do you guys make any money?

I mentioned before that our store is geared towards middle class family's. We're not a cheap store but at the same time our prices aren't so high up that we have people coming in wearing furs and diamonds.

Me: Nervous giggle. Haha, well we do sir.

AD: Well if you were receiving a piece of jewelry wouldn't you rather it be more expensive then cheap?

I look at the Dad then look back at the older and nervous son as he looks incredibly defeated and hurt by his fathers words.

Me: Honestly sir, it's the thought and feeling behind the gift that makes it more meaningful to me then the price.

I do and did truly mean that. The older and nervous son looked at me with a "thank you" expression on his face while his younger brother chimed in in agreement.

YS: Yeah Dad, I agree with her.

AD: Sighs. Okay, I guess we will look around a bit more.

This seems to be where the story ends, but nope. While the family, or I should say the Dad, looks around for a gift for the older sons girlfriend, I go back to another section to help another coworker out. It's not long until I hear that alert for the jewelry booth again. Ya-freakin-hoo. 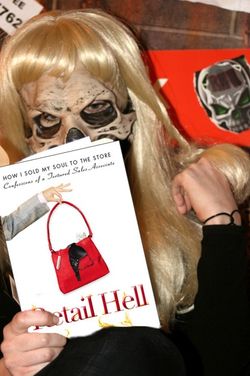 I go back up to see the Dad and his sons again and Dad tapping the counter in annoyance.

AD: We decided to take the moon necklace we saw before. Unless you're sure that this is the most expensive thing you have here.

AD: I mean, don't you think your items here are cheap? They probably break after wearing them once too!

If I wasn't upset by the Dads treatment of his son before, trust me when I say I was mad at this point. I should also mention that not one, but a couple of my supervisors were close by and getting bits and pieces about what was going on.

Me: No sir, I think the items are a good price for the quality you are getting.

AD: Which is cheap.

The Dad first, hands me a giftcard that is worth around 15 dollars. Fine, done, processed it.

Me: Okay sir you still have about $10 and whatever change left.

The asshole of a Dad then hands me a $100 bill! And then give me such a smug, "I'm better then your little store," look!

I quickly just took the $100 and gave back his roughly speaking $90 dollars back in change and told the family to have a nice day. The sons are really embarrassed and are mouthing sorry to me over and over again. Before they leave though, the Dad says to me... 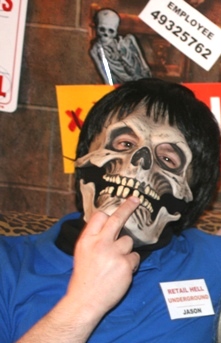 AD: You know, you should really try to go to college and do better for yourself.

So let me get this straight, one; you make your son return an item that he bought with his own money for his girlfriend that has a lot of heart behind it. I don't care if the guy is only 15, he obviously cares a lot about this girl! Second, you disrespect my store by calling it cheap over and over again and even try to get me to call it cheap and possibly get fired because my supervisors are listening. And third, you disrespect me and give me a mouth load of crap telling me to do better for myself and go to college. Why do you think I have this job in the first place? Do not invade in my personal life!

Luckily as soon as the Dad said that, the younger son in complete horror thanked me for my help and made his Dad leave the counter while the older and nervous son apologized for his fathers behavior and thanked me for my patience and left.

After I breathed in and out for a couple minutes I went back to the fitting room to grab more items to get put away. And guess what I found? The heart necklace that the Dad made his son return.

I know in one sense, the Dad felt like he was helping out his son, but in all reality it was really just making his son feel ashamed for something he should not have ever felt shameful about.

I'd be so tempted to mention something about getting ripped off at other more expensive stores.

"Me: No sir, I think the items are a good price for the quality you are getting.

AD: Which is cheap."

Yes the price is low but the quality is quite high.

My Fiance and I had a similar conversation, actually. She's in complete agreement with me, it's not the cost or the size of the rock on the ring, it's the love and thought behind it. Neither of us are rich, so we were picking things out when I found some really pretty and unique rings online. Not your traditional diamond engagement rings, but really nice, and they come as matched sets, so you get the engagement and matching his and hers rings. So yes, I agree completely and that dad was an ass

Without a doubt that dad is a total tool. Thank goodness it sounds like the sons don't take after him but still since they are so young they are forced to go along with him. He is also likely the kind of person who upon after giving you said gift is like "Do you know how much that cost me??"

I think the sons should shop without their father sticking his nose where it doesn't belong! Hasn't he ever heard of "It's the thought that counts"?

That father needs to be smacked upside the head with... anything. Jerk. I like presents that have thought behind them. Like my friend found this cute little pendant with a black stone and a gold dragon on it. Doubt it was very expensive, but I loved it.