Nasty Ass Thieves: I Want The Backpack, I Just Don't Want To Pay For It 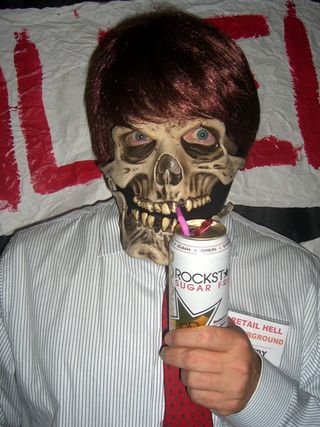 So last week we had a super intelligent guy try to steal from us. He was acting all shady, so when he went to go into a fitting room my supervisor counted out the five items he was allowed, and then told him to leave the rest of the stuff outside of the fitting room. She stayed there until he came out. When he came out, though, he had his items neatly folded and he had left the hangers in the room.

Then she gets a call from the grocery checkout supervisor saying "I think he's putting stuff in a backpack, right in front of me."

So my supervisor goes over to him, he keeps putting stuff in the bag, she says "Would you like me to take that to a register for you, so you can purchase it?"

She was half expecting him to stand up and punch her, but he came up with some lame excuse about how he was just making it easier to carry.

So he goes to the register, and "unpacks" the backpack. He left some expensive locks in the bag, thinking it wouldn't be noticed when the cashier lifted the bag. Every thing gets rung up, including the locks, and of course he doesn't want half the stuff. So my coworker who was cashiering for him takes off what he doesn't want and sets it aside, out of reach. This pile included the backpack.

Then the guy tries the stupidest thing he could try.

When my coworker is bagging the stuff he does want, he says "Oh no, that's fine, I don't want a bag. You can just put it in the backpack."

She looks at him and says "Ok, let me just add this back onto the order--"

She and my supervisor are both looking at him thinking WTF.

She says "So you don't want to pay for it, but you want me to put the stuff in it for you to take home?!"

And he says "Yeah. I can bring it back tomorrow."

Both my coworkers are just like "No. That's not how this works. You can't take the bag home unless you pay for it."

So he ends up leaving with only what he paid for.

I really don't get the stupidity of some of these people.