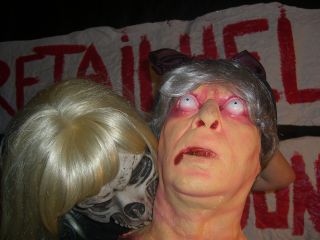 Let's take a trip back 5 years ago on what seemed like a normal closing shift. It's about a half hour before closing time. Pretty slow night. Then Big Thieves (BT) walk in. 55 year old mother and 28 year old daughter come in to return a box fan from another location that they didn't need. Had receipt. Return went fine.

Then they started shopping. Random things from cat litter to bed sheets to clothes to ping pong balls. The mom is asking really intense questions, but never thinking over any of the answers, just fires off another one instantly. Hand gestures everywhere while talking about bandages (we later on the security cameras noticed her grabbing Neosporin and Visine and dropping them in her purse. Never noticed it until then. Perfectly fluid movement).

When it's time to check out right at close, they're still intensely asking me questions. With all the stuff going on, I never noticed the daughter slip the 38lb jug of cat litter underneath her jacket she was wearing that I haven't gotten the chance to ring up yet and button it up before I could see it. They leave and I lock the doors for the night.

The manager felt that something was... off by all those random items and questions and decided to look at the security cameras. They're stealing stuff left and right (even later on looking at the footage, we found stuff we didn't notice them taking the first time we reviewed it!). Definitely a professional operation, so we call the cops in right away.

One look at them, and he told us that they've been trying to catch them for weeks stealing in pretty much all of the retail stores and gas stations in the nearest 3 towns. But there's nothing they really can do because they don't know who they are and where they'll go next. If they don't have someone there to stop them while they're in a store, they're getting away.

That's when I got the happiest I ever have been for being forced to push loyalty cards on a quota. I just so happened to convince both of them to sign up! We dug out the forms and the cop checked out the information on the radio. It's legit! We had their real names, address, and phone numbers, ages, and they've just moved into their house in another town about a month earlier.

They lived in a town about 40 miles away, so our wonderful cop coordinated with their cop to wait at their house for them to show up and arrest them!

Crazy how they could be so smart and coordinated about it, and then screw up in such a stupid way!