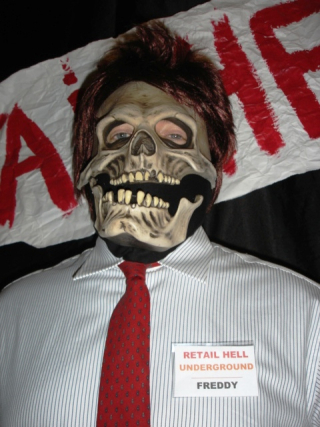 From Kelslaw, Tales From Retail:

I worked retail for about 3 years and this is by far my favorite story. It's a happy one too, so don't get excited for anything crazy. I worked in the same retail store for about 2.5 years...so most of my stories will come from that.

On a busy Saturday I noticed a group of 3 people, so I went over and greeted them. There was a husband and wife and someone else with them. I quickly realized that the husband and wife were both deaf. The 3rd person was their translator. They were looking to buy an iPad because they thought it would help them with their communication.

I explained a lot of the features of the iPad to them and I also started discussing mobile hotspots with them (this was before you could do it on your phone easily). I ended up spending over an hour with them on a busy Saturday. I wrote down an entire page worth of information because they needed something to take home with them. They were the nicest couple, but they weren't ready to buy. I was actually chewed out my manager for spending so much time with them (they never believed customers were coming back).

They came back about a week later and bought everything I recommended to them. They were super excited and nervous, but we finished everything and it went relatively smoothly...that was a rare occurrence with our systems. Another one of my coworkers had talked to them before I did, but I was more thorough in the information I gave. They were used to people taking advantage of them because they were deaf, so I wanted to make sure they knew everything they needed to know. Funnily enough...their translator came back and bought stuff from me several months later because of how much I helped them.

So onto the best part...a couple of months later I'm at work and cleaning the iPad display and someone comes up and hugs me from behind. I was a little freaked out at first, but it was the wife. I turned around and she gave me a bigger hug. She kept thanking me because they were able to do so much with the iPad and it helped their communication. She could read lips so we talked for a minute and she gave me another big hug.

It honestly made me feel incredible. You never realize the impact you can have on people.

Do you have a favorite retail experience?

My memory is a little vague on this one as it happened over a decade ago.

I was dealing with a customer who was a complete dumbass. They kept doing something wrong over and over again. For the life of me, I cannot remember what it was. Behind this woman was a 14 year old boy.

Anyways, the customer starts yelling at me about her own mistake and then out of nowhere, I see the boy doing the hand to chest gesture symbolizing retardation.

It took every ounce of my self control not to do anything more than smirk which the customer thankfully didn't see. After she was gone, I rang up his stuff which came to about $10-$14. I paid for it myself and told him that he was my new best friend.

My favorite moment happened a good decade ago when I worked tech support for crapcom. I was on this call for a while, had to be 30+ minutes, which was longer than norm. It was a guy, and I seem to recall a kid in the background. Anyways I get him back online and he stops me during my closing remarks and puts the kid on.

The kid speaking in a bubbly voice "Thank you so much computer lady!". That made my night. In fact, my favorite memory from that job.

Does it count if you're not actually an employee?

Every time I go to Best Buy I seem to end up helping people. Including the employees. Went in for a game once, spent an hour or so helping a guy who wanted to build a good rig for graphics rendering - he had no idea what video card he'd need, didn't realize he'd need such a heavy duty power supply (seriously, the rig he was talking up was MASSIVE in power consumption), turned out his CPU wasn't going to be compatible either so he'd have to look at one of those too...dude was so grateful for my help he kept offering me a job to help other people choose parts for their upgrades. Didn't take the job (can't anyway) but my god I will never forget the look of sheer THANK YOU GOD on his face. The employee who'd been trying to help him when I stepped in was also seriously grateful, he was pretty new and didn't really know what the guy would need either...

Then there was the Mexican guy (also at Best Buy) who spoke no English, their only Spanish-speaking employee was out on lunch, and he was desperate to find something so he could show a slideshow of pictures on his TV...I vaguely understood what he was saying, but I've always been much better with comprehension than actually speaking Spanish, so all I was really able to do was sort of tide things over till the employee got back and could help. Still, that grateful look again, and he was thanking me profusely for pretty much a good minute and a half for trying to help. Made me actually regret forgetting everything I'd learnt in Spanish class, haha.

One of my all time favorite moments was when I was working for the Fruit-themed electronic manufacture as tech support for their portable devices. I was helping this EXTREMELY sweet old lady, like literally the stereotype for sweet old ladies, and I needed her to find the "Home" button on her tablet. I tried literally everything I could think of to describe the location of that button, what it looked like, etc, and she just couldn't find it. Normally, I'd get frustrated, but she was so nice and sweet the entire time, that I just couldn't. After about 25 minutes or so, something clicked with her, and she says in this super excited voice "Oh, you mean the belly button"

Since then, I have stopped referring to it as a home button, and it has become the belly button. At least in my head, and it was a running joke amongst the other techs for a while

My favorite call in tech support, that I still remember to the word over 20 years and tens of thousands of assholes later... "Hi. I'm an idiot. I've done something incredibly stupid, and I'm hoping you can save me."