Automotive Hell: In the middle of a snowstorm, people seem surprised by snow 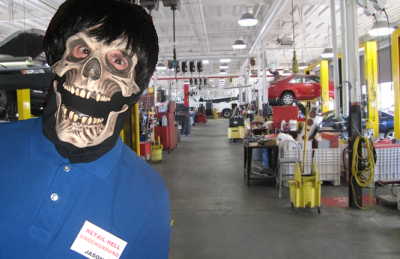 From desultorysock, Tales From Retail:

We live in Canada. After or on Halloween, it infamously begins to snow here. Just as due, Novemeber 1st, it began snowing. And it hasn't stopped. It snowed a little on the 1st. It snowed a little on the 2nd. And we got a snowstorm on the 3rd, which, as I type this, is still going, but with slightly less brutality. All in all, everything is buried under a blanket of white, about a foot deep.

When it first started, it was slippery; it was that kinda rainy, mostly snowy sort, which just creates ice. Now it's about -5 Celsius outside, and it's definitely fluffy, pure snow. Given that we're both in the automotive field, this means usually one thing - tire season!

While my poor boyfriend is talking to customers mostly looking to buy cheap tires, and a few have asked to have them installed in their meek oil change and tire repair shop yesterday, my shop is bigger. It's been nothing but people asking to put tires on, but we have engine jobs and tow ins to go through, and our tires are booked almost a week ahead of time at the moment.

"Any chance you can put them on today or tomorrow?" they'll ask. No.

"Can you let me know if there's a cancellation?" they'll try next. Sure, but there's five people ahead of you, at least.

"Can you do them quick? I have somewhere to be." I'll give you that this is more valid; but we have tires coming out our asses and only one tire machine. We can only work so fast.

If any of you are putting tires on your vehicles this season, please be patient with us!! Everybody wants their tires installed, so if you know you'll be pressed for time, call ahead, or book early! I had my own winter tires installed three weeks ago. Tire season is super stressful, please don't be last minute planners!

And again... I live in Canada. Snow is not anything new here, in a couple months we'll probably be buried under four feet of this crap. It happens every year, folks, so be prepared!

What is this 'snow' you speak of?

I so feel for you my friend but sadly most people's brains are not wired that way. People will always be more reactionary than precautionary. Take Christmas Eve shopping - besides Black Friday it was always the worst. Take the rush of BF and compound it by the fact that almost everything is sold out, and customers will inevitably be pissed off that you don't have X product in stock despite it being the most popular item that season and has been sold out for weeks/sells out the second you get it in.

Probably the same people who forget how to drive in snow when the first of the season hits.

Don't know where the op is from in the great frozen wastes of Kanuckistan, but I just heard on the radio here in Calgary that in 5 days we've already exceeded what the entire month of November normally gets for snowfall.

While Newfoundland is fairly balmy, forecast is 15 for tomorrow. Knock wood.

So you have it every year, booked solid for weeks and yet you have only one tire machine. Well...

Much like Walfart has 69,105 registers, but only has more than one actual cashier at a time for a couple of weeks around Hallowthanksmas, spending the money for an expensive machine that will sit around doing nothing most of it's life because they don't have sufficient work to need more than one would be dumb...
"Proper prior planning prevents piss poor performance". The people who wait until the last second and are then surprised that a bunch of other people are ahead of them are the same ones that wait until 11.59pm on 12/24 to do xmas shopping, or 11.59pm on 4/15 to do their taxes... and then whine about the lines and lack of stock.