An Indiana news reporter gets upset when there are no crowds or lines at the mall early Black Friday Morning
Menu Fails: "Fragrant Frailty Cashew Nut" Is My Favorite Goof

Black Friday Memories: Restoring A Bit Of Faith In Humanity 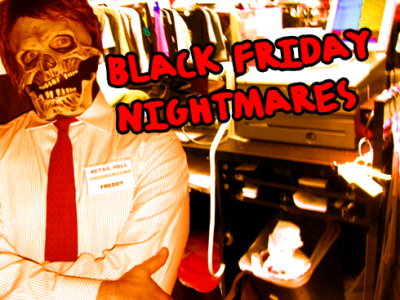 I thought I'd share a small tale to restore some faith in humanity.

Years ago I worked for GameStop. I was hired as a seasonal gig. The really tiny game boy advance had just come out. The pocket one. It was like only a couple inches in size... It's name escapes me. Alas it's Black Friday and we've been busy nothing catastrophic, just irritated customers in our little shoe box store. We were counting down the tills at the end of the day when there's a knock on the door. This was not unusual as despite our hours being clearly posted on the door people always bang on glass read and then ask 'are you closed?'

Well this particular bugger would not stop knocking so finally my manager goes to the door and says to the man 'were closed we open at 11 tomorrow.'

The man says he understands but that we hadn't rung him up for an item.

I remember the guy well he bought a metric fuck ton of stuff today and had been the only patient, polite guy to say thanks when we finished. Turns out I having been rushing all day had not charged him for a game boy advance pocket sized namey thing.

He was trying to come in to have us fix our mistake.

My boss told him be wanted him to just keep it because anyone with that kind of a more code deserves a reward for his efforts.

The man refused to take his item until he paid for it.

We rang him up, he paid and he left wishing us a good evening.

I always like to remember him when I think about working around the holidays. Despite all the gloom there are people who genuinely are good and nice and just want to get their shopping done fast and fair.

Gameboy Advance SP! I remember getting one of those for my birthday when they came out. I still have it.

Also: Lucky, you got a _Really_ good customer.

I still have mine too. And that is a real gem of a customer.

I wish I still had mine (special edition imported from Japan.) Unfortunately, an acquaintance of my sister's decided to destroy and/or sell all of my expensive games, CDs and game systems that I literally had no room to bring with me when I moved...