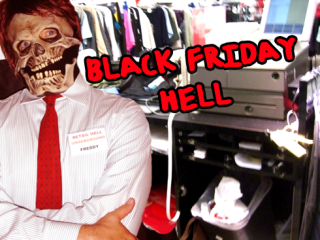 I don't work at a Black Friday store but I work at a Tim Hortons that never closes. (Even on X-mas double and a half is nice tbh :3) Anyway on Black Friday there is a Walmart across the street and a Future Shop, so we have a huge fucking rush of custies.

There was a little girl that kept trying to come into the kitchen (and when I say little I mean 3-5 barley knew any words).

I thought it was cute at first but started to get annoying (I'm a baker and don't want her to get burned be it touching a tray, someone spilling coffee/soup/etc) so when she comes to the back one more time, I just told my manager to get her parents.

When my manager asked where her parents were, my heart nearly broke because she burst into tears and said she doesn't know.

So we kept her in the break room and had the cops come in. She was at our store for at least 9 hours (that being when I started my shift at 6am)!

Her parents had gone to Walmart and every other store in the plaza early in the morning, and left her alone in a Tim Hortons.

Had I seen her parents I would've been fired that day.

I hope those cops hauled those parents away in cuffs for child endagerment, abondonment and neglect! That's just terrible on a level my brain can't even fathom.

Samus, I agree with you! Couldn't the parents hire a babysitter or grandparents to watch the little kid? I hope the cops didn't scare her too much even though she wasn't in trouble and I hope the kid was kept occupied somehow during those 9 hours! Those moron parents don't deserve to be parents!

OP, man forget being fired, I would have been going to jail that day.

I hope the parents were charged or something. Although in this day and age, it always seems that the worst parents get a slap on the wrist.