Holiday Humor: Lego Santa... What Are You Doing?
Signage Slip-Ups: and what? 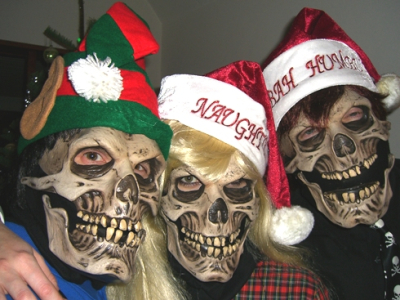 From AviGABS, Tales From Retail:

I want to share this because it's all too easy to only write about the horrible customers in retail.

Back when I worked in the terrible mall store (the same one as my other story, "Stuck in the Middle,") I met this man who was looking for a Christmas card for his nephew. I greeted him, and it was obvious that English was not his first language. He could have been anywhere between thirty five and fifty, my guess would be mid-forties or so? He was a small man, a little frail, and he had hollow cheeks and a beard and a little toque. He gave off a sweet, gentle vibe.

I tried my best to help him, though it was a bit difficult with the language barrier. He asked "Spanish?" I shook my head and apologized. "French?"

As a Canadian, I've taken twelve-ish years of French lessons, but can I remember a word of it? Nope! I smiled, embarassed, and said, "German?" No luck.

Despite our language woes, he managed to tell me that his nephew likes Star Wars. I show him where the Star Wars Christmas cards are, all the while trying to be as kind and courteous as I can. I understand what it's like to be in a country where you can't speak or understand the language--I know it can be stressful, and that sort of situation doesn't improve when someone is impatient or condescending with you.

With all that in mind, I excuse myself so I don't hover over him, and before I go he says (In broken English,) "Thank you for your kindness, thank you. I will never forget it." I don't think I'd ever felt the joy of the season quite like I had then. I saw this fellow a few times after that, but he didn't recognize me.