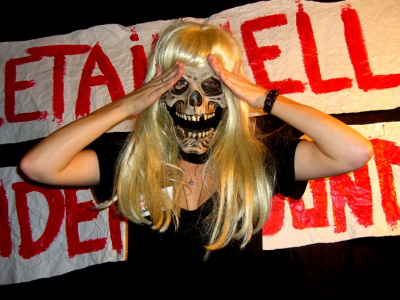 The last few weeks of the year were a bit crazy at my work. Not as crazy as I used to deal with at my old McJob, when I worked in the middle of a shopping boulevard during Christmas, but it was still crazy.

I'm sure I am skipping a ton of crazy stories, but I can always post them other days
Least Crazy Craziness: Someone flushed a toothbrush down our toilet. It managed to clog our toilet (duh?). We "closed" the bathroom by putting up a sign on the door, but my manager wouldn't let me lock it up. So of course people used the toilet in between me closing it and our Mr. Fix It guy fixing our toilet.

Little Bit More Crazy: Guy came up to the counter with a receipt. He was acting a bit uppity and had an air of "my shit is better than your shit". After talking with my employees for a moment, I got called up (I was off the floor, finishing up inventory). The guy started to get snotty with me, pointing at his receipt:
Guy: I ordered a *sandwich that comes with a lot of bacon*, plain, and it didn't have bacon on it! It had nothing on it!! I want a replacement and a refund!
Me: *A bit skeptical as this is a newish sandwich, but just a smaller version of a current sandwich so I don't know how my employees would not put bacon on it* Do you have the sandwich?
Guy: No! I ate it!!!!!!
Me: .......Well without the sandwich, I cannot replace it or refund your order. I'm sorry....
Guy: *with attitude and spite* Well FINE then!
The weird thing is, he gave up so quickly. He just huffed away from the counter, all pissy.  But if the sandwich is made wrong...why eat it?! I will always be willing to fix mistakes we make! Bring it up to the counter and say "Hey, this is made wrong..." and I will remake it with no questions asked, aside from "How was it supposed to be made?" 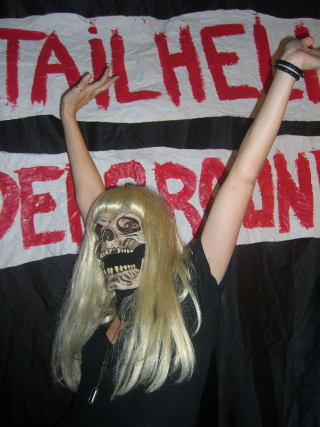 More Crazy: A  big group of guys came in, and I took their order. They all wanted their food bag separately but didn't tell me until near the end of the order. At that point, I couldn't remember what the first person ordered,compared to what the 7th guy ordered.(it was an $85 order at a fast food joint, if that gives you any indication at the size of the order and why I could not remember what went to who) So I bagged it all and handed them extra bags so they could sort everything out. They seemed fine with that, and sorted everything out in front of me. As they were sorting things out, they pulled out a sandwich and got confused about it, as we wrap it up in a *normal sandwich wrap* and just write the special sandwich name on it. The one guy got a bit upset, thinking it was Normal Sandwich, but accepted it when I said "It's Special Sandwich you ordered, not Normal Sandwich, we just use those wraps*

Two minutes later, two of the guys are back, with the receipt in hand. They claimed I had shorted them a sandwich, and kept pointing at the receipt. The receipt said they ordered 3 *big special sandwiches* and 2 *special sandwich jrs*, which they got. I know they got. I packed it myself. They kept saying "no we got 3 sandwiches, you owe us a 4th one!" while pointing to the Jr sandwich line on the receipt. I kept telling them they got it, they wouldn't listen. I have a feeling they ignored me when I said "that is the special sandwich, not *normal sandwich*" 5 minutes  before, despite them going "ahh okay". Or they though that the Jr version was supposed to be a full sized version

After telling them multiple times they got their food, and them switching which sandwich I missed, (full sized sandwiches or jrs, they couldn't keep it straight) I just asked them to bring the bags over. Which they didn't do. They just gave up after I refused to budge.  I don't know if they were just trying to scam a $7 sandwich out of me or if they were genuinely confused over the fact that a Jr sandwich is not the same as a normal sandwich.

(sorry about the confusing way that is written out: It boils down to they kept switching which sandwiches were supposedly missing, but I know they got the whole order correctly as I took the order, and packed it)

Craziest, in my opinion: This one I absolutely love. I turn off a lot of the lights after we close, but some people may still think we are open. We closed early on Christmas Eve, and I did my normal turning off of the lights outside, but we still had quite a few people come through drive thru. No big deal. Problem is, we don't have an auto greeter that says "Sorry, closed" or some variation of that phrasing. We also don't wear headsets after we are closed, because ...I don't know why. We just don't. Maybe from too many people saying "come on, please? make this sandwich just this one time? For meeeee?

Any ways, people went through the drive thru, not realizing we were closed. They did the standard "Hello? You guys open?" question. Which that doesn't bother me. What makes the special people crazy though, is after about a minute of not being answered, some people will sit there and go "hello? Hell-oooooo, HELLO!!!!!!!!! YOU GUYS OPEN??!?! *takes a deep breath and literally shouts into the speaker* HEEEEEEEEEEEEEEEELLLLLLOOOOOOOOOOOOOOOOOOOOO ARE YOU GUYS OPEN!!!"

If we do not answer you the first time, why are we going to answer the 10th time you ask?

Because crusties are persistent!