Bathroom Signage: Is This A Thing Now?
Engineering Fails: Let me smash your face when you are drying your hands 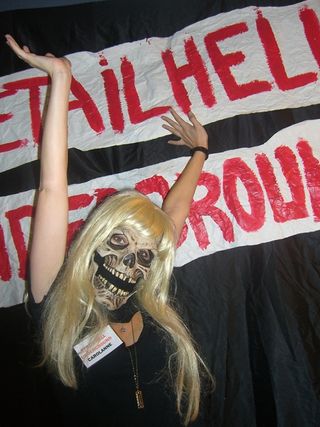 When I went to work for a very high end women’s retail clothing chain, I thought that I had taken a step up.  I had been employed in small boutiques and specialty stores, but the pay was low and the days were slow. With the big store I could expect competitive wages and good hours, not to mention a liberal employee discount.  As most pipe dreams are, it was full of holes and not what it seemed.  The pay was tied to a commission system and the hours were the whim of several managers who never seemed to speak to each other when putting together the weekly work schedule. The employee discount was part of the dress code. You had to wear the clothing that was being sold  at the moment and had to keep current with the season . Not to mention that you couldn’t wear last season’s offerings or you’d face being sent home with a warning.

This was a happening  place, the muzak was loud and pulsing from 9:00a.m. until 9:00p.m and the place was always crowded with upcoming fashionistas, the ultra rich , creepy ooglers of young women, shoplifters and on occasion, social justice warriors. So unlike my sleepy retail past. There were the usual fussy customers, the discount rat millionaires  and uptown  moms of teen screamers, but there were also more of the incredibly self- entitled wealthy horrors that one only thinks exist as characters in comedies about big  fancy department stores. The dressing rooms were large, well appointed, individual rooms (basically rivaling a NYC studio apartment). Large triptyck mirrors, and a settee completed the trying on  experience. We sales associates were on hand to coddle, fawn, bring more clothing into the dressing rooms and provide refreshments ( cookies , coffee , bottled water etc. was brought in for big spenders ).

All of the amenities did little to stop the piggish ways of many of the “finer” shoppers, clothing was still piled on the floor of every dressing room along with the coffee cups, stepped on cookies and water bottles spilled on the merchandize. The managers would blame the sales associates for not “handling” the customer’s needs properly. The spacious changing rooms actually amounted to a shoplifters’ paradise.  There were no limits to what you could bring in to the fitting room and no one questioned shopping bags, backpacks or large handbags. According to management, we catered to a higher form of life who wouldn’t think of thievery, yeah, and I have a bridge to sell you.

A big sale meant a big commission, that is unless the items were brought back the next day in bulk, with stains, tears, smelling of alcohol and cigarettes.  Of course the management would always take the clothing back no questions asked because these were well heeled uber customers who were the meat and potatoes of the store.

I once had an expensive silk lingerie set brought back covered in bodily fluid, the solid brown kind. The Prada sunglass wearing client looked at me as if I had  two heads when I said that she couldn’t return it for health department reasons. She screeched for a manager and her toupee topped , orange skinned  husband , who had fallen asleep in a large comfy chair.  One of our managers toadied over and took back the garment, refunded the obsidian card, belittled me and bowed down to the “caca” goddess and her silent mealy husband.

Aside from moneyed megalomaniacs, the social justice warriors would regularly hold sit ins, protests, shame offs and generally steal while making sure we knew about sweatshops, silkworm abuse, fur is death ,consumerism  is against humanity, eat the rich and so on. Fine, we working slobs had to live through it all while management scurried off to safety.

Not that all employees were created equal.  The older ones, with many years under their retail service belts were just there to die a death with dignity, still hoping some old wealthy customer would remember them in their will. Quite a few of the young sharks were also fashion design students, hoping to snag a backer for their hot new “line”, or at the very least, connections to a fashion house . I fell in the middle, middle aged and hoping to make the rent.

After years of inhaling parfums de mucho lire, handling small bitey dogs while Mamam tried on sheaths that were three sizes too small and generally living the life of a beaten down servant, I left the chandeliered halls of taste and celebrity to retire as a schlub living in the world’s largest invisible trailer park…Brooklyn, N.Y….although it Is becoming the high rent district …soooo