Bathroom Signage: The Story Behind This Professional Poster Must Be Horrific
Engineering Fails: Half ramp is better than no ramp

Retail Hell Memories: What did you do to that cake? 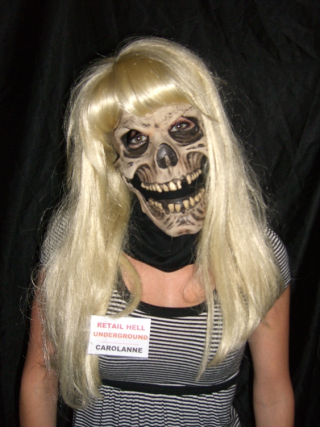 From luvya386, Tales From Retail:

This is from years ago when I worked for a grocery store. I work at a call centre now but I still remember this incident.

I was a drone in the bakery department, which means I could do pretty much everything except airbrush cakes. We had a fairly large display case with all sorts of cakes in it. Much larger than other stores. It basically shows off the types of the cakes we have in the store. Often we'd have people requesting to write on them and stuff, and we would always put them in a cardboard cake box instead of the crappy plastic containers.

As you can imagine, near the end of the day people have bought many of the display cakes. Which is usually not a problem, we replace them with more from the freezer and they defrost throughout the day. Occasionally someone would want one of the frozen cakes. No big. We let them know to wait about 30 mins for it to thaw and they go on their merry way. Then comes a lady who is talking on her phone who barely speaks to me, let alone listens.

I'll be Me, co-worker will be CW, and the customer will be Rude Phone Lady (RPL)

Me: What can I get for you?

RPL: I want [SpecificCheesecake], why don't you have any?

Me: We do have [SpecificCheesecake], I can -

RPL: It's not there.

Me: Well, I just sold the one in the display, but I can grab you a frozen one from the back?

RPL: just kinda nods at me while on the phone

So I go to the freezer in the back, grab her cheesecake, and bring it out to show her (we always show the cakes to make sure we know which one they meant).

RPL: slightly impatient Yeah, that one! continues talking on the phone

Me: Great. just to let you know, this is frozen, so it will take about 30 mins to thaw out -

I box it up print out the receipt and give her the frozen cake and continue the pre-closing clean-up. About an hour and a half later a co-worker comes from the cash.

CW: Hey, did you sell a lady a frozen cake a while ago?

CW: Thought so... to prove it was frozen she had us try to cut it with a pocket knife and it is stuck, we can't get it out.

CW: I know right? She's pulling something to try and get it free I guess.

For those of you who don't know, the frozen cakes can still be cut. We actually preferred to cut them while frozen to sell slices or half cakes, they are just easier to handle like that. I don't know what this lady did to turn her cake into the Sword in the Stone.