Server Hell: "It Goes Against God, Justice And The American Way!" 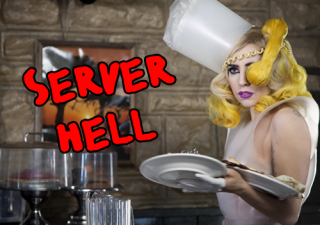 My favorite instance of the 'never coming back' promise happened on a Christmas Eve with a 9pm 2 top.

My table flipped out!

They felt it went against God, justice and the American Way to play anything but Christmas Music on Christmas Eve.

They complained to me, but I said that I had no control over it; the music was at the bar.

They complained to the manager, who gave them a shrugging brushing off. (And who had, with his eye twitching, told said bartender that if he heard one more rendition of God Rest Ye Merry Gentlemen, he was going to write "GET FUCKED" on the nearest church's lawn with the figures from the life-sized nativity scene they sported. He may be going to hell, but I'd ride in that handbasket proudly.)

They yelled at the bartender, who informed them in no uncertain terms that they could leave, or they could shut their howling screamers.

Finally they stood in the middle of the floor and yelled, "If this continues then we definitely won't be back NEXT Christmas Eve!"

Ha! Best news I'd heard all night! After all their incessant bitching, I collected my 10% tip while (facetiously) apologizing for their sad, disappointingly Jingle Bells-less night. Then we all grew shit eating grins and waved goodbye.