Retail Robin: Do It Faster!
Parking Hogs: It's Not Like Anyone Will Notice At Night, Right?

Closing Time Nightmares: If I hold my breath, maybe I’ll pass out before I scream. 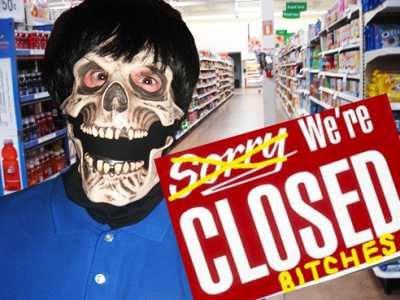 From QueenLolth, Tales From Retail:

I work in grocery, and pretty frequently end up working closing shift which ends at midnight. It was 11:30, and there were three of us all on the registers working down the quick burst line that formed. An older gentleman comes up to my lane and I do the usual pleasantries. There’s a reusable bag in his cart, that is full of winter gear. Whatever that’s not atypical. I’m trying to get through this transaction as quickly as possible because my IPMs have been pretty low lately. There’s about $50 worth of product in his cart. I start bagging things when he stops me, asking about how much of certain things he bought. I answer. He then proceeds to ask me to bag each of those items separate from each other. I gave him the benefit of the doubt because they were tomatoes and, you know, they’re pretty delicate.

And then he asks me to triple bag them.

To be clear, this is 7 tomatoes already bagged in 2 separate produce bags, and bagged in their own plastic grocery sack. I triple up each of the bags because I figure it can’t hurt, it’s probably just the tomatoes.

It wasn’t just the tomatoes. It was every single item in his cart. All requiring a minimum of three bags before I could put them away. No item could be bagged together, even if they were the same thing. I went through an entire stack of plastic bags helping this guy. I eventually just started holding my breath so I didn’t tell this guy to just back off and let me do my job and he’s being excessive. Meanwhile the reusable bag in his cart is staring at me, laughing. I can feel my IPMs dropping like a rock.

I get to the end of this torturous experience when he asks why one of his coupons didn’t work. I told him that one of the products was incorrect, and tell him the product he actually needed. He wanders back off into the store to find it, while I’m digging through dozens of bags looking for the wrong product that he doesn’t want anymore. When he finally leaves I give my manager behind me the biggest “help me” look I can muster. And then she breaks my soul- he’s a regular, and security actually had to talk to him about coming in at 5 minutes to close.

TRIPLE bag everything? My sympathies.