Vet Sign Shenanigans: And That's Why I Don't Want To be A Vet...
Retail Robin: Do It Faster!

Drive Thru Window Hell: Unwarranted Anger with a Side of Hash Browns 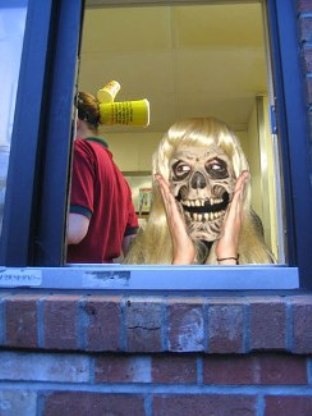 From Tales From Fast Food:

This story is about breakfast time at the chicken chain at which I work. I was on drive-thru window that morning, and a lady came through the drive-thru and ordered a hash brown scramble bowl meal. (This meal consists of hash browns, meat of the guest’s choice, cheese, and egg all mixed together.) Now typically, every breakfast meal comes with a box of hash browns as the side, which for some reason really offends people because THERE’S ALREADY HASH BROWNS IN THE BOWL.

Anyway, this lady had replaced her bowl with a fruit cup. Prior to my interaction with her, I had no idea what the exchange between her and the girl on headsets had been like. She pulls up to the window and I read the order back to her. (I’m M (me) and she’s HBL (Hash Brown Lady)

M: Chicken bowl meal with a fruit cup and a Diet Coke?

HBL: Yes. The bowl comes with hash browns in it, right?

HBL: I really think you should tell your manager that there are too many hash browns in the meal.

I tried to sound convincing, but apparently I wasn’t convinced enough.

I really wasn’t sure how to take that statement, but at that moment, my Manager, L, had just come back to the front of the store and HBL saw her behind me.

HBL: Is that your manager? Can you call her over?

I called L over and HBL explained her problem again. L was very apologetic and even gave the lady her side for free.

The fact that this lady was so mad and L was so apologetic over something about the menu that she had no control over was so funny to me, and I had to try really hard to keep from laughing.

This exchange took about five minutes and I was in the red by the time the next car came around. I greeted them with my normal greeting of “Good morning! How are you today!” To which they replied rather sourly, “Late!”

Does anyone else in fast food feel the need to always apologize for things out of their control?