Amusing Amazon Customer Q & A: Are These Vegan?
Parking Hogs: You Got Large And Red Correct, But That's No Fire Truck 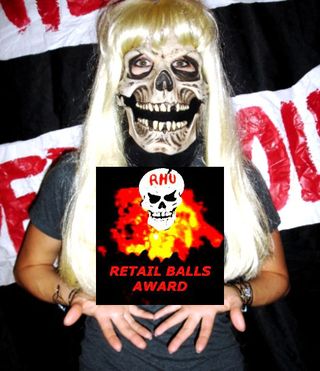 Molly_Mog is bestowed a Retail Balls Award for how she handled a monstrous customer:

So yesterday was the most satisfying day I've had in ages.

I was on the till, the weather is closing in and it's busy as all hell, we're hands on deck all over and the boss is finally taking a quite bite to eat. This is the scene and this is how it happened:

A bloke came up to my till with several coffees he'd just got from the cafe bit down the end and asked for some tobacco, papers and tips, that's fine and I get them. As I notice his coffees I politely tell him: "Next time, to save you time, you can get everything all at the same time."

He had been very polite and seemingly happy but suddenly turned into a vicious spitting monster (I mean really, completely changed) and starts shouting at me: "Don't tell me how to fucking order my stuff you stupid cow!"

I'm stunned and literally stop in my tracks as a friend who was with him told him to calm down and stop that. He told her to shut up too and I shouldn't be telling him what to do. I'm angry and confused at the same but time for once didn't let the anger go. I still had the papers and tips in my hand and the tobacco was still on the counter, nothing paid for.

A calm washed over me and I looked straight at him and told him: "I do not deserve to be spoken to that way, I'm refusing you service."

I go to take back the tobacco and he tries snatching it from my hand, almost succeeding, but stopped himself and his friend ushered him out of the shop as he mutters on about how I shouldn't be telling him what to do. She looks at me as they go and mouths: "I'm sorry."

My co-worker said I should go and tell boss because that doesn't fly and we need to keep him informed when arseholes pull that type of stunt. So as I'm heading to the back the bloke returns. He's obviously calmer and says: "Miss, can I talk to you for a minute?"

This is the first and only time I've ever been able to do this and I still look back in shock. I looked him straight in the eye and with a perfectly calm and straight face I resounding said: "No!"

Then I walked out to the back to tell boss that someone might want to talk about what had just happened, instead the bloke had walked off.

I'm still surprised at it all.

Yeah, I'm surprised too.. at OPs rudeness of not giving the customer a chance to apologize. If he wasn't, can still go to the boss to give them some heads up.

I know it better, you were obviously there and knew everything that happened.

That person went from polite and, seemingly, happy to spitting fury and insults in split second. I don't care who you are I am NOT going to accept an apology from someone like that, I don't have to and my manager would back me up in that too.

You might be a rug that people can walk all over but I am never going to let anyone talk to me like that and then think an apology will make it better.

Before you can start wibbling about "What is they had Tourette's?" if they had then their friend would have said something but people with Tourette's don't behave that way.