Parking Hogs: I'm Pretty Sure Hitting These Is A Sign You Shouldn't Get Any More Alcohol
Vet Sign Shenanigans: Silentó Gets Punned 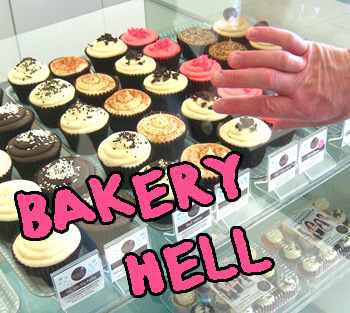 From fatbudgie, Tales From Retail:

Back in high school I worked in the bakery section of an upscale grocery store. This was my very first job, and after a few weeks of working there, a guy in his late 20's came to my counter to order some pastries.

Me: Hi, how are you doing today?

Guy: yeah, can I get the tart?

Me (looking at a showcase with like 20 different tarts): Sure... um which one?

Guy (annoyed): that one (he pokes at the glass and left a fingerprint which was my biggest pet peeve)

Me: Alright, so the chocolate caramel?

So I boxed it up for him and he was on his way. About an hour later he returns to the counter, and when I walk up to it he tosses a ripped pastry box in my direction.

Guy: what is that? This is not what I ordered.

I look into the box and see a quarter of a tart shell that has clearly been bitten into, almost completely finished. I was new and anxious and wasn't really trained to handle customers like this. So I asked him if we wanted a different one and he said yes, so I put his new choice in a box. I knew I wasn't allowed to give away free stuff, so I thought it was a good move to price it at $1 (it was originally like $3.50), and boy was I wrong.

Me: Oh... I don't know... I just thought because you ate the first one already but weren't satisfied that a discount would be nice.

Guy: This should be free. I'm reporting you to the owners.

I was so nervous about being fired from my first job went to the back room and had a breakdown. Thankfully my manager didn't get mad and just told me to call them next time and they would deal with it.