Cashier Hell: Give Me Back My Card 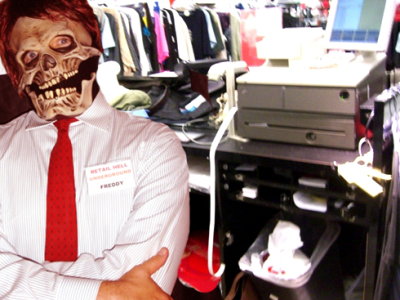 From  clancycats, Tales From Retail:

So, I had a customer the other night in my department. I work in the lingerie department in a huge retail store. She was acting suspicious from the get-go, but I really didn't think about it until it was time for her to pay. My store has it's own credit card, and if a customer forgets theirs, we can look it up using their ID and Social Security Number.

I have my register screen turned so both of us can see it, and as shes typing in her Social at the POS pad, I ask for her ID. Note, that on the screen, it tells me to hold onto the ID until the transaction finishes. I start keying in the info on the ID and notice that the ID is VERY worn. However, I found it really weird that there just so happened to be a hole RIGHT where the third digit of the year on the expiration date would be. It would read as 20x0, so you couldn't tell if it said 2000, 2010, or 2020. (However, IDs in this state got updated several years ago, and the old cards would not have a 2020 date, so it was pretty obvious that this card was expired.)

I did not want to cause any commotion, so I let the card go through anyway. As soon as I am done keying in the info, the lady tells me to give her back her card. Right when I explain that I have to keep a hold of the card until the transaction is over and show her the BIG RED LETTERS on my screen telling me such, she swipes the card from my hand, smiles and mock-tells me "Well, I have had this card stolen before, so you will just have to give it back." as if to accuse me of stealing and walked off with her stuff, telling me she would go pay elsewhere. As soon as she was out of earshot, I definitely called security to tell them of the incident. Apparently the next department called a manager, and they outright refused because the card was unreadable.

This reminds me of the time a guy came in to do a large refund without a receipt, and when I asked him for his ID, I got suspicious since the style of his ID card was very outdated (it'd expired in 2003!)

I asked him for another ID, he handed me a work visa card, claiming it was 'government issued.' He continued to insist this despite us telling him it was invalid.