Ice Cream Shop Hell: When the Ice Cream is Taller Than You
Cake Mistakes: Friend Ordered A Cake With "So Long Suckers" On It For His Last Day At Work

Closing Time Nightmares: "But the doors were unlocked!" 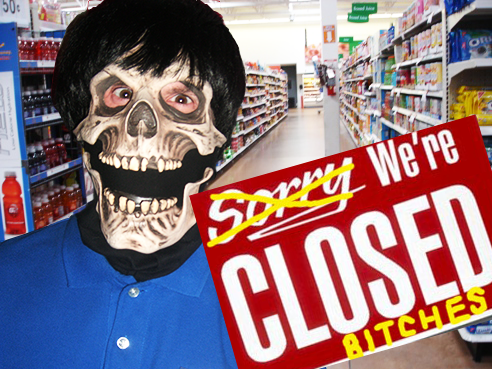 From  VikeeVeekie, Tales From Retail:

Disclaimer, I seriously had to rant about this.

I work at a relatively large bike shop, and today I worked another busy Saturday.

As I had a driving lesson this morning, and dropped off I was without any way to get home and called my grandpa if he can pick me up, this part is important. After 4 PM I shut down the computers, closed the PIN terminal and flipped the signs. I did not lock the front door however to let my grandpa in. While I was waiting for my grandpa, me and my coworker decided to go to the shipping receiving area outside with a couple of beers.

After about 10 minutes of closing I went back to the store floor with a beer bottle in my hand to check if my grandpa already arrived, but instead I see a random man. Not really caring about the beer bottle I told him 'I'm sorry, but we're closed.' the guy replied with 'but the doors were open and I only need something (that we didn't have)!

I told him that's because I am waiting for somebody who does get to come in, and briefly checked what he needed. We didn't have it. Guy understood it and left, only for unlettered number 2 to arrive at the scene too, and ignore TWO 'closed' signs as well! Still having the bottle in my hand I told the guy we were closed down, said the doors were unlocked too. He only needed one thing but I couldn't do the transaction as I already shut everything down, and I'm not going to bother booting our POS computer again for one single item worth 10 bucks. Told him that I cannot open the register anymore which he understood too.

I work retail for 3 years and I am still surprised why people think if the door is unlocked explicitly means the store is opened, if even two signs are there to aid them. My mistake was that I should have locked them, and I'm glad they understood it but it's still a giant bother.

You definitely should not be leaving a store unlocked and unmanned! That is an open invitation for thieves. You should have either locked the door and waited where you could see your grandfather arrive to let him in, or you should have locked the door and waited outside. But it's not cool to just leave the place unlocked and sit outside in the back.

Or had Gramps call or text when he got there, or tell him "I'll be around back"... while yes, they ignored closed signs, one should know better than to expect a sign to deter a customer...

I have been to several small stores where an employee forgot to flip the sign to open in the morning and then got to busy to do anything about it. if the lights are on and doors are unlocked, I'm going to assume the place is open as well. The fact the employees decided to leave the store completely unmanned to go back and have a drink reflects more on the staff hired than the customers.