This is the astonishing moment a woman smashed the window of a Popeye's restaurant because her meal deal didn't include a soda.

Police are hunting for the woman, described as being between 18 and 25, after she vandalized the restaurant in Staten Island on Sunday. 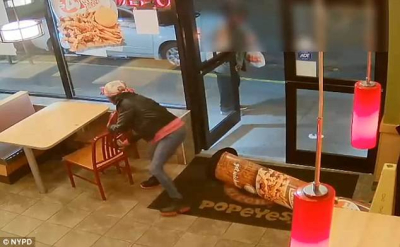 But after being informed that the deal didn't come with a soda, she became 'extremely angry' instead, staff told NBC 4.

Employees said the woman was convinced they were cheating her as they explained the meal comes with chicken strips, a biscuit, fries and a sauce.

They suggested the woman may have confused the deal with Wendy's, which does including a drink, but at that point it was impossible to reason with her.

The woman flipped staff off before throwing a sign at the door, then attempting to put a chair through one of the windows.

I wish there were more meal options that didn't include a drink.

Reminds me of a person that lived in a slum that planted flowers by her door. The neighbor was like this lady and ripped them the flowers to pieces, just to be spiteful. Yelling something about you bitch, you think you're better than me.

Crazy is an understatement.