Cake Mistakes: a Cup of Poo?
Dumbass Customers: Fun with IT 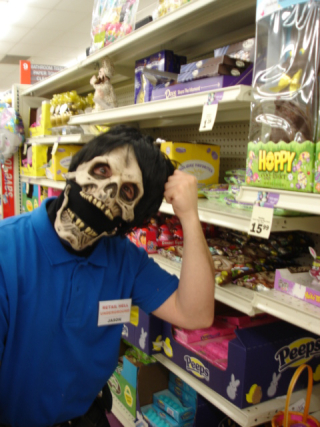 I work in the back office for a large department store that sells pretty much everything. They usually put me on the sales floor for holidays since that's when we are super busy and I always dread it because I don't know where anything on the floor is. Last Easter weekend, they had me on the sales floor and my specific duty was to put back all the items that guests randomly leave places because they don't want them anymore.

I was putting things away near the Easter section, when I saw one guest had an entire shopping cart filled past the brim with Easter products. This guest was decked out in a party dress, high heels, and a bright fur coat. She was walking around the section posing for pictures that were being taken by a man with her who was sagging his pants so low I could see the entire cleavage of his butt.

So I watch for the next hour or so as she attempts to pose but is constantly interrupted by other guests actually trying to shop. Surprisingly, she was super polite and as guests excused her to get something she would say "That is no problem take your time, it's not like I own the store" or something along those lines.

Eventually I sneak back to my office to do some work and get an update from another worker in the section that once she finished her photo shoot, the two of them actually put back all the items they took from the section back in their proper locations.

I was absolutely shocked and thanked the heavens that I did not have to spend hours battling through crowds of frenzied Easter shoppers to put everything back.

It was an Easter miracle, to say the least.