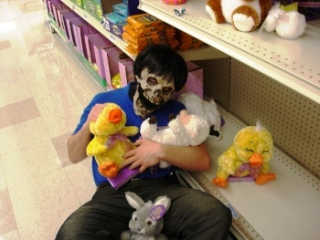 In the spirit of the period let me tell you a story about an Easter long ago during my time working for Large Supermarket Chain in Australia.

The Grocery Manager (GM) had just created a large display of golden, good quality, chocolate bunnies in the centre of a wide aisle. One of our co-workers (CW) complimented him on it but informed him that eventually, someone would crash into it with their trolley and the bunnies would break.

Cue to two weeks later. The display was still in the same place and being refilled as necessary. Every day, GM pointed out to CW that it was still intact and customers couldn't miss seeing it. Indeed we had seen an upsurge in the number of units sold from the previous year as it was in such a prominent location.

At that stage, every day at 2pm, all members of staff had to leave their duties (except the checkout and deli teams) and go through the aisles tidying the store. This day we were very near to the bunny display.

GM had just again pointed out to CW that the display was still intact.

CW conceded with ill grace that it was holding up and she was wrong that no one had run into it.

Just then a customer came along pushing her trolley but looking behind her and calling for her son to hurry and catch up. She turned back to the front just in time for her trolley to impact quite heavily with the display.

You guessed it – bunnies went flying in all directions. GM could do nothing except stand there with his mouth open in shock, staring at the fruits of his labours all over the floor. CW was on the floor too, laughing her head off.

The customer was horrified at what she had done but we assured her that there were no hard feelings.