Merchandising Fails: Totally edible right?
Adventures with Cartie: "I'm crossing at this intersection and no one is going to stop me!" 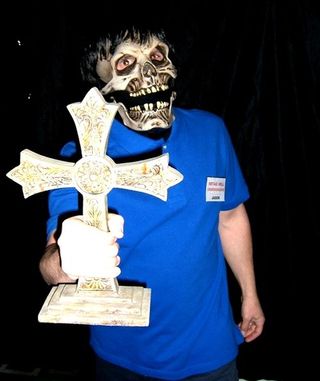 I don't know if TFR accepts bad co-worker stories, but I figured I'd give it a try, I see no rule against it.

So, a couple years back when I was trying to build experience, I worked (volunteered) in the back room of a clothing store that gives profits to a cancer thing.

I knew going in that it was a predominantly Christian workplace. A lot of my co-workers wore crosses and had Jesus on the wall of the place. Whatever, not my business, don't care.

Somehow, while folding clothes ready to hang up, religion came up and my co-worker, let's call her Stephanie (Steph), just outright asked me my religion. I responded with a passive 'I think that my religion isn't important, and personal to only me.' In my tone of voice I think I accurately portrayed that I was uncomfortable with mentioning it.

The rest of the small-ish group got the hint, dropped it, and continued they're conversation. I went over to make some coffee for myself and the group.

Steph followed me over and began her questioning. 'Well, you're clearly not Christian. Our Saviour is on the wall and you didn't even acknowledge him.' I rolled my eyes, mentally, and said, very firmly this time: 'I do not want to bring up my religion. Please, leave it be.' 'But you're not a Christian?' She continued. I humoured her and said simply 'No.'

I went slightly red in the face, from embarrassment and anger. I had made it so damn clear to her that I didn't want to pursue the topic, at all, and then when I do cave, to an extent, she goes and betrays my assumed trust of her by telling everyone there.

Luckily, my boss, we'll call her Faye, had my back, and almost instantly snapped back 'Yeah, and I'm Wiccan' and left the room to tend to the floor.