Spam Mail Sunday: "Citizen Of American," Looking For Love
English Is Hard: Proud To Own A Computer Controller

Thrift Store Hell: Walked out with a TV 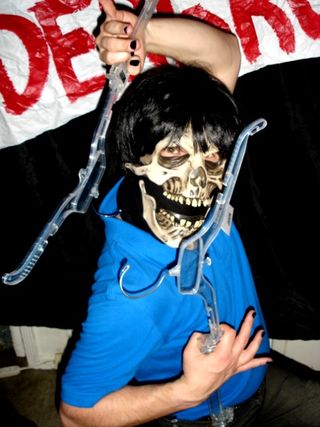 From Wednesday167, Tales From Retail:

So I'm a manager at a big name thrift store. A cashier (C1) called me to the front because he saw a guy (G) walk out with a TV. Guy and his wife were at a register and paid for a bunch of items, then walked over to the TV picked it up and walked out the door. C1 told me he didn't pay for the TV. I asked the other 3 cashiers if he had paid them for the TV at an earlier time. (Sometimes people do this with large items.) They all said no.

At this moment a third manager (M) walked up. I told M what C1 had told me. M and I (who are both female) walked outside to G and asked for his reciect for the TV. He handed over a receict, but the TV wasn't on it. He looked and his wife and said, "Oh, I thought you paid for the TV." Like he didn't know. ($99.99 for the TV)

He tried to pay us for the TV in the parking lot. Nope. Made him get the TV out, and hand it to me. I carried it back in, and set it in the front. He then tried to cut the long line. And made him get in the back of the line and then stood next to the TV until he pay for it showed her the receipt and then he finally was able to carry it out to his car.

All the customers that were around had figure it out on their own what was going on and kept glaring at him and giving him the look of Shame he was so embarrassed.