Toxic Managers: "Just Give Her The Alcohol Without I.D. Do It!" 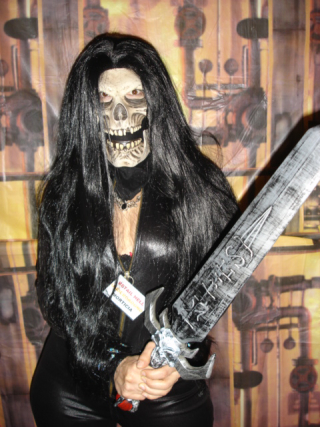 Here's one for you. Some chick dressed as Harley Quinn didn't have ID and in the UK we are required to see it if you are in a group and look under 25 when purchasing alcohol.

She said her boyfriend works at the Mcdonald's housed inside the store, and that a colleague who was off that night knows her so she never has to bring her ID.

She also told me that she has work in the morning and I'm cutting into her drinking time, that it's all my fault and if she has to leave and get ID, something terrible is going to happen.

Supervisor comes along and offers her a discount off her purchase if she goes to get ID, she refuses and repeats her threat of something terrible is going to happen and starts dropping f-bombs left and right.

Supervisor asks her three times to stop swearing and eventually she gets the guy (wearing normal clothing and has ID) with her to go to her apartment to get the ID on her bedroom floor while she waits at the checkout.

It takes a while so I avoid my checkout while she waits with her friend who's dressed like Poison Ivy (had ID) so I can do other work to occupy myself with emptying trash from other registers etc.

Supervisor notices it's been awhile and the guy isn't back yet, so he tells me to just go ahead and let her purchase their alcohol.

I refuse (let pretend that he's not telling me to do something illegal here) and I tell him she scares the crap out of me, since she was being threatening and abusive.

The Supervisor then tells me that we obviously need people tonight that do their jobs, tells me he doesn't want to embarrass himself by telling the customer I refuse to serve them, and that I should go home.

While the supervisor stormed off to sulk (and tell another supervisor that I'm misbehaving), I managed to beg a colleague to take over, which caused my supervisor to rush over there now that he could be best friends with the customers (all smiles and giggling) up until the transaction was finished to which he then began to walk past me huffing and puffing, presumably to sulk somewhere and complain about me some more.

That is when I took the opportunity to grab my stuff and get out. Thankfully I ended up getting sick and used it as a sign to take a few extra days off to avoid him.

So along with a new hate for my supervisor, I now have a huge dislike for Harley Quinns and clowns.

I think I want to become Batman.

"The Supervisor then tells me that we obviously need people tonight that do their jobs,"

Well, yes. Like not selling alcohol to someone obviously underage?

Mmmhmm. I don't know what the fine is for doing that in the UK, but I imagine its steep like it is here in the US.

it's a minimum £5k fine, criminal record, lost job and possible prison sentence, Sandman, that and the shop loses its alcohol licence and possible closure.