Crappy Design: I Cringed At This One
Retail Robin: Because That's Apparently The Most Important Word Of All 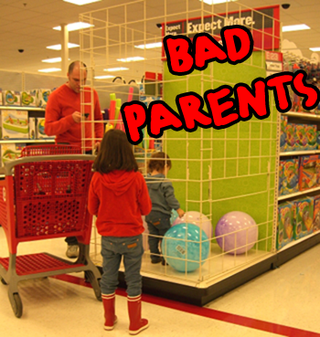 From sowasteland, Tales From Retail:

At my store, we have a policy that children 12 and under must have an adult with them. If we see a child unattended in the store, we simply tell them that they need to be with a parent. We have good reasons for this. Parents leave their kids unattended in toy isles where they not only break things and make a mess, but also climb on shelves and try to get items off of top shelves, which could cause them to get hurt. For this reason we have become very strict with this policy as summer approaches. I’ve had a few people make complaints, but this one sticks out.

This woman called the store, demanding to speak to the manager, at which point I told her I was. She was angry because one of my employees had “kicked her 10 year old daughter out” while she (the mother) was at the store next to ours, and that was against the law. I explained that her daughter had to have a parent with her, since she was under 13, and explained the potential risk. The woman just continued yelling loudly enough that the customer I was serving commented on it after the conversation was over. I thought, how could you really complain that you have to be with your child in a store?

Thought that was over with. Then, I hear about a conversation on Facebook about how our policy is illegal because our state doesn’t have a law that requires parents to be with their kids, so she can sue (yes, because that’s how the law works, since there isn’t a law against it, it’s illegal for companies to make a policy against it). Something about “free range kids”.

Your store should change its policies and call 911, asking for child protective services instead.